Oil prices have edged-up as hurricane Sally closed offshore oil and gas production in the US and industry group American Petroleum Institute (API) data showed a decline in US crude stocks.

On 15 September, more than 25% of US offshore oil and gas output was halted and export ports were shut as the storm crawled offshore along the US Gulf Coast.

Oil production in the region has been interrupted by storms for the second time in less than a month after Hurricane Laura.

News
Australia’s LNG exporters to pay an extra $5.8bn in taxes this year 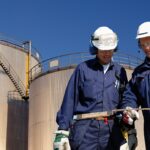 According to data released by API, US crude stocks fell by 9.5 million barrels in the week ending 11 September.

Meanwhile, official data on US inventories is due to be released later today.

The news agency quoted ING Research as stating: “If we see a number similar to the drawdown the API reported overnight, it would likely provide some immediate support to the market.”

The International Energy Agency (IEA) also trimmed its 2020 oil demand forecast on 15 September, citing caution about the pace of economic recovery from the Covid-19 pandemic.

This move came after the Organization of the Petroleum Exporting Countries (OPEC) said it anticipates world oil demand to fall more steeply than its earlier forecast.