The Government of Oman has signed an exploration and production sharing agreement (EPSA) with Shell and its partners for Block 11.

The deal is for the exploration, evaluation, and development of natural gas resources and condensate in Block 11.

Under the deal, Shell Integrated Gas Oman will operate Block 11 with a 67.5% stake. 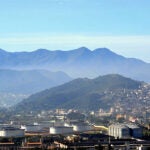 News
Stick or twist: the future of African oil and gas

TotalEnergies will own a 22.5% stake while OQ will hold the reaming 10% stake in the block.

Shell senior vice-president and Oman Country chair Walid Hadi stated that Block 11 is on the western side of Oman, within and nearby the Umm as Samim Sabkha.

The exploration activities will involve the seismic survey of 1,400km² in late 2022 and will be followed by more exploration wells.

Oman Energy and Minerals minister Salim bin Nasser Al Aufi was quoted as saying: “There is a continuous focus in MEM on enhancing the natural gas reserves of the Sultanate of Oman through exploration and appraisal activities undertaken by several companies in the country.

“This agreement strengthens the strategic relations with partners in the sector such as Shell, TotalEnergies, OQ, and others to ensure Oman’s energy security and attract more foreign investment, adding the highest value to the local supply chain.”

In December last year, Shell Integrated Gas Oman, OQ, and Marsa Liquefied Natural Gas signed a concession agreement with Oman’s Ministry of Energy and Minerals for the development and production of natural gas from Block 10 of the Saih Rawl gas field in Oman.

In a separate development, Shell announced that its CEO Ben van Beurden will step down at the end of this year and will be replaced by Wael Sawan.