Wintershall Dea and its partners have started production from the Nova oil field, located in the Norwegian North Sea.

As per the plan submitted by the project partners in 2018, the development of the Nova field is estimated to require an investment of Nkr9.9bn ($1.02bn). 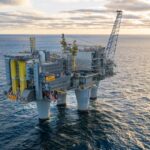 “We are expanding our subsea technology expertise and meanwhile, three further tieback-developments, including Dvalin, are in the planning.”

The field has estimated recoverable gross reserves of 90 million barrels of oil equivalent, with the majority being oil.

“This would be sufficient to cover Berlin’s oil demand for more than five years,” Wintershall Dea said in a statement.

Wintershall Dea said the Nova field comprises two subsea templates, which will be tied back to the Gjøa platform.

Oil production from the Nova field will be transported through the Gjøa platform via the Troll Oil Pipeline II to Norway’s Mongstad terminal.

The associated gas from the field is planned to be exported through the Far North Liquids and Associated Gas System (FLAGS) pipeline to St Fergus in the UK.

Wintershall Dea operates the Nova field with a 45% stake. Its other partners include Sval Energi (45%) and Pandion Energy Norge (10%).

In May 2022, Wintershall Dea agreed to sell a stake in the Nova field, and two other fields, in the Norwegian North Sea to Norway’s OKEA in a deal worth €108m.

The transaction, which is due to be completed, includes the sale of Wintershall Dea’s 6% stake in the Nova field, its 35.2% stake in the Brage field, and the 6.46% interest in the Ivar Aasen field.