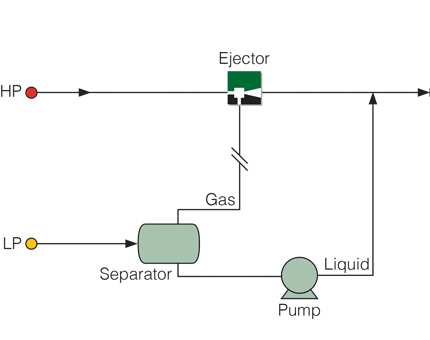 Ejectors offer an attractive solution for generating extra production from LP wells and in the process extending field life. Most commonly, shut-in or liquid loaded wells can be revived, as well as satellite or stranded wells deemed too expensive to recover with traditional techniques.

In this example, gas from HP wells was being choked to a lower pressure to meet downstream process conditions. Wasting ‘usable’ energy in this way offers no added value to production. Instead, the HP gas was used to ‘drive’ an Ejector, which not only delivered the HP gas at a suitable lower pressure to meet downstream conditions, but also lowered the back-pressure on the nearby LP wells, bringing them back to life.

The ‘Universal Design’ Ejector allowed for new internals to be fitted as HP well pressures declined over time, keeping the Ejector operating at the optimal design point and, as such, keeping production steady.

An added advantage is that by using an Ejector the total energy recovery from a LP Well can be increased by up to 25% additional revenue over the life of the well.