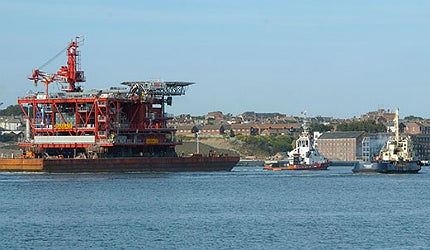 Babbage gas field is located in Block 48/2, about 80km offshore of the UK in the North Sea. It lies in 139ft (42m) of water and is the largest gas accumulation in the southern North Sea.

E.ON Ruhrgas is the operator of the field, with 47% interest. Partners include Dana Petroleum (40%) and Centrica Resource (13%).

The field has been developed in two phases with an investment of €350m ($440m). The first phase of development commenced production in August 2010. Phase two development was completed in May 2011. Life of the field is estimated to be 20 years.

Babbage was found by the 48/2-2 discovery well in 1988. It was deemed uneconomical, as the discovery well flowed at the rate of only 3.8 million standard cubic feet each day (mmscfgd).

An appraisal well, 48/2a-4, was drilled in July 2006 to a depth of 11,000ft. The well targeted the crestal area of the reservoir and flowed at a rate of 11mmscfgd. It established the presence of significant gas reserves.

Geology and reserves of Block 48/2 in the North Sea

The Babbage field’s reservoir lies at a depth of 3,200m in the lower Leman Sandstone formation. It is a north-west trending tilted fault block, which created tightly fault-sealed compartments. The reservoir comprises of an 80ft thick upper interval and a 200ft thick lower interval.

Babbage field development was approved in 2009 by the UK Government. The field is produced through five horizontal production wells. Three wells, B1, B2z and B3, were drilled during the first phase of development, followed by another two during the second phase.

“Babbage field development was approved in 2009 by the UK Government. The field is produced through five horizontal production wells.”

The reservoir includes five main production targets, with the C layer being the main target. Development of the field presented many challenges due to the structure of the reservoir.

Phase one wells were drilled using a wired drill pipe and motorised rotary-steerable system. The first well, B1, encountered several sub-seismic faults and required inclination corrections. Drilling of the B1 well helped in refining the drilling process of the B2z and B3 wells. The technology used to drill the B1 well ensured that the B2z and B3 wells met their targets.

The five production wells are connected to the Babbage platform. The platform is a normally unmanned installation installed in 42m of water. It was constructed in a period of ten months, employing nearly 500 people.

The gas produced from Babbage is transported through a 28km long, 12in diameter carbon steel pipeline to the West Sole Bravo platform. From West Sole, the gas is exported to the Dimlington gas terminal in Easington, east England.

Ode won the contract to conduct the conceptual engineering and FEED studies for the topside facilities of the Babbage platform.

“E.ON Ruhrgas is the operator of the field, with 47% interest. Partners include Dana Petroleum (40%) and Centrica Resource (13%).”

SLP Engineering was responsible for the construction of the platform. It subcontracted Merpro to supply three proppant removal packages.

Technip was awarded a €32m ($40.2m) contract to design, fabricate and manufacture the export pipeline, a 40t manifold and three flexible tie-in jumpers. It was also responsible for pre-commissioning, tie-ins and testing of the equipment.

SGC Metering supplied a metering computer system for the field. Penspen was responsible for the detailed design of the field development and also the preliminary design of the export pipeline.