Expand
Blackbird oil field is located in Block 20/02a of the Outer Moray Firth, about 120km north-east of Aberdeen, Scotland. Image courtesy of Hogweard.
Blackbird has been developed as a subsea tie-back to the Aoka Mizu FPSO, located in the Nexen-operated Ettrick field.
The FPSO is designed to handle 30,000 barrels of oil and 35MMscf of natural gas each day. 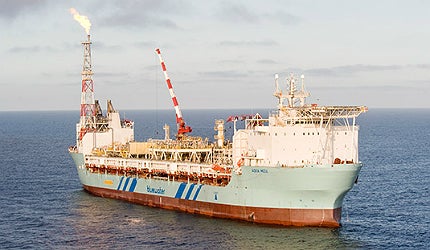 Blackbird oil and gas field is located in Block 20/02a, in the UK section of the central North Sea. The field is situated approximately 120km north-east of Aberdeen, Scotland, at a water depth of about 112m. It was brought into production in November 2011, about one and a half months ahead of schedule, and within budget.

Dana Petroleum, which had owned 12% stake in the project, sold off its equity in the asset in April 2011.

The Blackbird discovery was made by Nexen in August 2008. The discovery well 20/2a-8, drilled by the GSF Arctic IV semisub rig, encountered 33.83m of net pay in Upper Jurassic sandstones. It flowed at an average rate of 3,800 barrels of oil a day (bopd) during the drill-stem test.

The Blackbird offshore oil and gas field is being developed as a subsea tie-back to Nexen-operated Ettrick field’s floating production, storage and offloading (FPSO) vessel, Aoka Mizu. The hydrocarbons produced from Blackbird are processed on the vessel.

From there, the oil is transported to shore through shuttle tankers, while part of the gas is re-injected into the sea, and the remaining is transmitted to the St. Fergus Gas Terminal via the Scottish Area Gas Evacuation (SAGE) system.

The investment plan was sanctioned by the project partners in December 2010 after assessing the outcomes of the appraisal well and examining the feasibility and economics of developing the field.

The field development plan (FDP) for the Blackbird project was approved by the UK Department of Energy and Climate Control (DECC) in July 2011. The sanctioned scheme calls for the drilling of a single production well and a single water injection well.

Development drilling for the first production well was started in April 2010 and completed in August of the same year. Drilling of the water injection well was commenced in July 2012. Completion and tie-in of the well is scheduled for the third quarter of the year.

The Blackbird field is tied-back to the Ettrick oil field through a seven inch flexible production flow line and a three inch flexible gas lift flow line, both measuring six kilometres in length.

"Nexen Petroleum UK and Nexen Ettrick UK are subsidiaries of Nexen, a global energy company based in Canada."

An electro-hydraulic control umbilical with chemical injection is installed between the production well and the Blackbird dynamic umbilical riser base.

The electro-hydraulic control and chemical umbilical facilitates supply of hydraulic pressure and transmission of power and communications to the Blackbird subsea facilities from the Ettrick field’s FPSO.

To avail this facility, a new umbilical riser is installed at the FPSO. The umbilical was successfully connected to the J-tube on the vessel in February 2012 through the help of First Subsea’s diverless bend stiffener connector.

As per the base development plan with one production and one injector wells, the current maximum predicted recoverable volume of oil is a little more than ten million barrels.

The recoverable volume, however, can be increased to 22 million barrels of oil by developing the field with four wells, two each for production and injection.

The field is predicted to produce 15,000boepd of oil and six million standard cubic feet (MMscf) of gas each day. The volume will decrease with the field life, with production expected to fall to about 1MMscf of gas by the third quarter of 2016.

Scotland-based company EnQuest is redeveloping the Ardmore field (known earlier as the Argyll field) located in the central North Sea.

Bentley oil discovery is located in block 9/3b in the North Sea, 160km east of the Shetland Islands on the western edge of the Viking Graben.

The Chestnut oilfield is located in block 22 / 2a in the Central North Sea, about 290km east of Aberdeen, Scotland, in 120m of water.