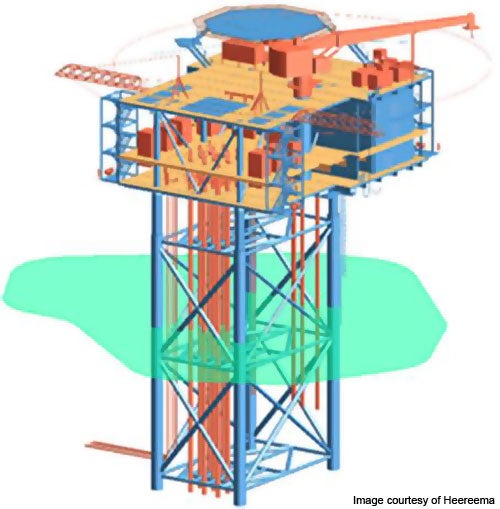 The field was originally operated by RWE Dea (70% interest) until its ownership was transferred to INEOS in 2015.

INEOS currently operates the field with a 70% interest, while Sterling Resources owns the remaining 30%.

The Breagh field development cost is estimated at approximately £1bn.

The Breagh field was discovered in July 1997 by discovery well 42/13-2. The well encountered a 121m gas column, demonstrating the presence of hydrocarbons.

The Breagh field reservoir is of the Lower Carboniferous age and contains sandstones of the Scremerston Formation.

“INEOS operates the field with a 70% interest. Sterling Resources owns the remaining 30%.”

Using data from the 42/13-2 discovery well, appraisal well 42/13-3 was drilled in 2007. The appraisal well flowed at a rate of 17.6mmcf a day, establishing the presence of significant hydrocarbons.

The well was drilled to a depth of 8,624ft and is being used as a production well.

The Breagh field is being developed in two phases. The first phase of development began in 2011. It involved exporting gas through an offshore pipeline connected from new Breach A normally unmanned installation (NUI) platform to Cotham Sands, Redcar.

The gas processing facility has a capacity to process 11.3 million cubic metres of natural gas a day.

In phase two of development, another nui, Breagh bravo, will be installed on the east end of the field.

Additional wells will be drilled from the new platform and tied back to Breagh alpha. Phase two was approved by the UK Department of Energy and Climate Change (DECC) in July 2011.

The Breagh A platform was installed in October 2011 at the west side of the field. Eight production wells were drilled using a jack-up drill rig of a similar size to the Ensco 102.

The jacket of the platform is 85m-tall, with the topsides weighing 1,400t. The jacket is supported by piles weighing 4,000t.

From the manifold, gas and fluids pass through the export riser onto the onshore processing facility.

A 100km export pipeline was laid at the Breagh field to transport gas and liquids onshore. The 20in pipeline is made of carbon steel API, and was laid at Coatham Sands. A 3in-diameter monoethylene glycol (MEG) pipeline was also laid to provide hydrate and corrosion inhibition.

A fibre-optic control cable for communications and control purposes was installed along with the MEG pipeline.

From Coatham sands, a new 10km onshore pipeline carries gas and liquids to the TGPP at Seal Sands, Middlesbrough. The plant is owned by Teesside Gas and Liquids Processing (TGLP). A 3in-diameter MEG pipeline and telemetry system were also installed.

PPGS carried out a multi-client 2D geostreamer survey of the Breagh field. PX group was awarded the contract for construction and installation of the onshore 20in and 3in pipelines, and the fibre-optic control cable.

“The field is expected to annually produce 1.1 billion cubic metres of gas during phase one from 2014 to 2018.”

In November 2010, RWE Dea awarded the engineering, installation and pre-commissioning contract for the offshore pipeline and fibre-optic cable to Allseas.

The contract called for detailed design engineering of the export line, MEG pipeline and fibre-optic cable. Allseas deployed its pipelay vessels, Lorelay and Tog Mor, to lay the main and near-shore segment of the pipeline.

Heerema Vlissingen delivered the Breagh a platform under an engineering, procurement and construction contract awarded in August 2010. The platform was constructed at Heerema’s Vlissingen yard in the Netherlands.

In March 2011, AMEC was awarded a £32m contract by TGLP to modify and extend the gas processing plant for processing the gas and liquids from the field.