Expand
Petrobras' Cascade and Chinook oilfields are located in the Walker Ridge Block, around 300km (180 miles) south of the Louisiana coast, in the Gulf of Mexico.
A conceptual diagram of the planned Cascade and Chinook subsea architecture with FPSO.
The subsea unbilicals were supplied by Aver Kværner and use carbon-fibre technology.
This APL loading on Pierce will be similar to that used on the Cascade and Chinook development. 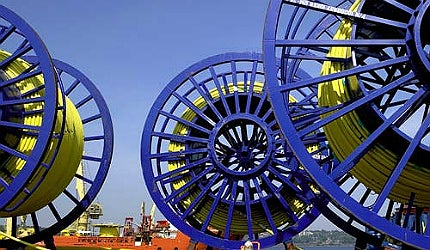 The most significant aspect of Petrobras’s Cascade and Chinook development in the Gulf of Mexico (GOM) was the company’s intent to deploy one of the world’s deepest floating production, storage and offloading (FPSO) facilities to date to accept production from the two fields.

"The BW Pioneer FPSO, operated by BW Offshore, is installed at a depth of approximately 2,500m. It is the first such facility in the US GOM."

The BW Pioneer FPSO, operated by BW Offshore, is installed at a depth of approximately 2,500m. It is the first such facility in the US GOM.

In March 2011, the Bureau of Ocean Energy Management, Regulation and Enforcement (BOEMRE) approved the use of the FPSO at the field.

Det Norske Veritas (DNV) is the certified verification agent (CVA) and class agent for the project. DNV ensured that all the significant elements of the project met US Minerals Management Service (MMS) requirements.

The project was originally scheduled to come online in 2010, but a drilling moratorium issued by the US Government delayed the start-up to mid-2011. In June 2011, Petrobras announced a further delay in the project’s start-up.

The delay was caused by problems with commissioning of the subsea system at the field. The fields were expected to come online towards the end of 2011.

In December, however, Petrobras stated that the production will start in January 2012. The Cascade-Chinook fields were finally put into production in February 2012.

Cascade and Chinook fields in the Walker Ridge Block

Cascade and Chinook are located in the Walker Ridge block, 300km (180 miles) south of the Louisiana coast.

"Cascade and Chinook are located in the Walker Ridge block, 300km (180 miles) south of the Louisiana coast."

Petrobras America, a wholly owned subsidiary of Petrobras, is the operator of both the fields, owning 100% and 66.67%, respectively. The remaining 33.33% of Chinook is owned by Total E&P.

The fields have been developed using two subsea wells in Cascade and one subsea well in Chinook, approximately 30km south of Cascade. Each well is drilled to an approximate depth of 27,000ft, and based on reservoir performance Petrobras may expand production to additional subsea wells on each field. During phase II of the fields’ development Petrobras plans to drill 14 additional wells.

Appaloosa Field, Gulf of Mexico, US

The Appaloosa oilfield is located about 200km south-east of New Orleans in the Gulf of Mexico at a water depth of 2,500ft.

Petrobras signed a contract with Heerema Marine Contractors (HMC) for the installation of the Chinook infield flowlines. The two pipe-in-pipe flowlines are each 12 miles long with a 14in casing pipe carrying a 9in inner pipe. They have been installed in water depths ranging from 8,000ft to 8,800ft (2,440m to 2,680m) as part of phase I.

Atlantis Deepwater Oil and Gas Platform, Gulf of Mexico, US

Considered one of BP’s most technically challenging projects ever, the Atlantis platform is the deepest moored floating dual oil and gas production facility in the world.

Sonardyne International was chosen to supply an integrated acoustic positioning and telemetric system as a part of an extensive life-of-field integrity monitoring system for five free-standing hybrid risers (FSHR) in the field. The deal was awarded to Sonardyne by BMT Scientific Marine Services, which was chosen as the systems integrator for the project.

Petrobras awarded two contracts worth $300m to Technip in January 2008. The first contract was to provide design, construction and installation of five, free-standing hybrid riser systems. The second contract was for installation of infield flowlines and a gas export pipeline.

BW Pioneer FPSO used in the Gulf of Mexico

BW Pioneer FPSO is specified to have 500,000 barrels of oil storage capacity, 80,000bpd processing capacity and 16mmcfpd of natural gas export capacity. It features a disconnectable turret buoy, allowing the FPSO to move offsite during severe weather events such as hurricanes. It is moored by a polyester mooring system linked to torpedo piles and vertical loaded anchors.

The crude is offloaded via a shuttle tanker.

BW Offshore was awarded a $740m contract for delivery and installation of an advanced production and loading (APL) disconnectable submerged turret production buoy and mooring system.

Bristol-based DPS was awarded the EPC contract for the crude stabilisation and flare modules that forms an integral part of BW Offshore’s design. DPS was also responsible for managing the process and piping interfaces for the entire process topsides.