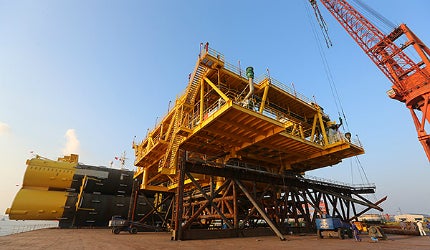 Corvina is a shallow water oil and gas field located in Block Z-1, which is a coastal offshore area covering approximately 2,246km² at the southern end of the Gulf of Guayaquil. Geologically, the block falls within the precinct of the Tumbes Basin in north-west Peru. Average water depth of the area is about 61m.

"Contracts to construct, mobilise and establish the second platform at Corvina field were finalised in September 2011."

The field entered commercial production in November 2010. During the first month of production ending December 2010, the field produced an average of 4,656 barrels of oil a day (bopd).

BPZ Energy, an independent oil and gas exploration and production company, is the operator of the Block Z-1 with a working interest of 51% in the development.

Block Z-1 was originally acquired by BPZ in partnership with Syntroleum Peru Holdings in November 2001. BPZ went on to become 100% owner of the block in November 2004.

Pacific Rubiales Energy, a Canadian petroleum exploration and production company, became the second owner of the Block Z-1 development after acquiring 49% share from BPZ Energy in April 2012. Total value of the deal was $335m including $150m in cash.

"During the first month of production ending December 2010, the field produced an average of 4,656 barrels of oil a day (bopd)."

Corvina field was discovered during 1970s and 1980s, along with the Albacora, Barracuda, Delfin and Piedra Redonda fields. A total of 18 wells were drilled during that period in these geological structures, with five wells testing positive for oil and / or gas.

The wells were, however, either suspended or abandoned, as it was not economically viable to produce and trade natural gas from the fields.

From the mid-1970s to early 1980s, a total of five wells were drilled in the Corvina field by the previous operators Tenneco and Belco. The two existing drilling and production platforms were also installed by Belco. The first platform is situated in the East Corvina, while the second platform (CX-11) is standing in West Corvina.

An engineering study concluded that the first platform will not support future development plans, necessitating a new platform to be installed prior to starting any drilling activities taking place at the eastern section of the field. The second platform is still in use and is currently being utilised in drilling and production activities in the western section. BPZ is currently concentrating on the western section, where a total nine oil wells have been completed.

Waimea oil field is located in the BM-C-41 block in the Campos Basin, 80km offshore of from Rio de Janeiro in Brazil.

BPZ Energy is now in the process of commissioning the second drilling and production platform, CX-15, to access about 23Mmbo of proved undeveloped oil reserves in the Corvina field. Its construction has already been completed and the platform (hull and topsides) was successfully delivered in August 2012.

When installed in the third quarter of 2012, it will be the world’s first buoyant tower drilling and production platform. The weight of the hull is 2,500t, and the weight of the topsides facility is 1,500t.

The new platform will be positioned approximately 1.6km from the existing Corvina platform. Both the platforms will be interlinked through a series of subsea pipelines.

The CX-15 will be capable of handling 12,200bopd and will have gas compression capacity of 12.8MMcf/d. Produced water handling and injection capacity of the platform will be 3,500bpd.

The new platform is expected to commence drilling operations during the second half of 2012. The platform is estimated to cost around $60m.

Contracts to construct, mobilise and establish the second platform at Corvina field were finalised in September 2011. Contracts were supervised by BPZ’s subsidiary Soluciones Energeticas.

A joint venture of GMC and Horton Wison Deepwater was awarded the front end engineering and design (FEED) contract for the platform’s buoyant tower, which is composed of four cylindrical cells, each measuring 8.4m in diameter and 60.1m in length. Production equipment is being engineered and designed by Audubon Engineering.

The platform’s topsides fabrication was undertaken by Shanghai-based Wison Offshore & Marine, a subsidiary of the Wison Group, in Nantong, China.

The Perla gas field is situated in the Cardon IV block in the Gulf of Venezuela. The field, which covers about 33km², lies at water depth of 60m.