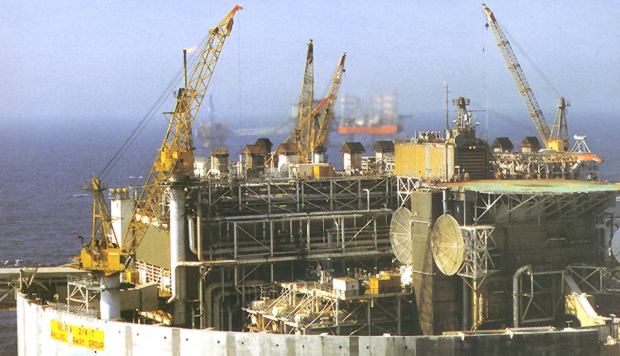 The infrastructure consisted of 27 permanent installations, ten of which were located in a central Ekofisk complex.

Approximately 560,000bpd oil was piped 354km to the Phillips terminal in Teesside, while around 2 billion cubic feet per day of gas was piped 440km to the Emden terminal.

In December 1993 Phillips Norway submitted a Nkr20bn expansion plan to bring oil and gas to market until 2028. This envisaged:

In March 2009 ConocoPhillips was granted permission to use the Mærsk Innovator for drilling eight injection wells on the Ekofisk 2 / 4VA. The platform became operational in 2010.

ConocoPhillips also operates Ekofisk South project located on the PL 018 in the Norwegian part of the North Sea.

The Norwegian Parliament granted permission to develop and operate the project in June 2011.

“The infrastructure consisted of 27 permanent installations, ten of which were located in a central Ekofisk complex.”

ConocoPhillips used the Maersk Gallant jack-up and the large crane vessel Thials to carry out repairs on the platform. The Ekofisk 2 / 4W was announced to be replaced by a new water injection platform in 2011.

Technip was awarded the contract for installation and commissioning of subsea facilities connecting the new platform with the Ekofisk complex.

ConocoPhillips was granted permission for the installation of a new accommodation facility, Ekofisk L, in March 2010. The new platform, which replaces Ekofisk 2/4 H and Ekofisk 2/4 Q, came into service in 2013.

ConocoPhillips contracted Aibel in July 2010 to provide engineering, procurement, construction and installation services for the platform. The company will also connect the platform to the Ekofisk complex. Work was started in 2011 and completed by 2013.

The contract for building the platform jacket and a bridge support jacket was awarded to Aker Solutions.

“The project, aimed at improving oil recovery in the Ekofisk field, consists of 35 new production and eight water injection wells.”

Like the 2 / 4X, it stands in a water depth of 76.1m, although it is rated for 90.1m to obviate potential subsidence problems in the chalk reservoir.

When 2 / 4 J became fully operational, a number of platforms started to be decommissioned. Production from third-party fields such as Valhall, Gyda and Ula were merged at 2 / 4 J and then piped to Emden and Teesside.

Statpipe gas production flowed via a new line directly to booster platform B-11 on the Emden pipeline. By 2006 only two of the original Ekofisk Centre platforms were operational.

Existing pipelines connected to either 2 / 4 R, P or G platforms were re-routed and connected to the 2 / 4 J platform, requiring over 63km of new lines to be laid. A total of 23 tie-in spools are already in place on the seabed.

The jacket and the utility module for Ekofisk 2 / 4 J were built by Aker Verdal, while the module support frame and the process module was built by Amec Process and Energy.

The separation module was built by Umoe Haugesund. The generators came from Dresser Rand in Norway and turbines were from by Nouvo Pigone.

The jacket for Ekofisk 2 / 4X was built by Aker Verdal, the drilling module by Hitec / Dreco and topsides by Umoe Haugesund.

The Edvard Grieg field (formerly Luno), is located in production licence PL 338, in the Utsira High area of the Norwegian North Sea.

CORROLESS® has been a respected name in the specialist anticorrosion...

Smitsvonk specialises in ignition systems for industrial applications including gas...

The Catcher Area Development involves the combined development of the Catcher, Varadero and Burgman fields located on Blocks 28/9a and…