Expand
Gaza Marine gas field lies off the coast of the Gaza strip in the Mediterranean Sea.
Development of Gaza Marine has been stalled due to disputes over Palestinian territorial waters, Image courtesy of TUBS.
The eastern Mediterranean Sea holds several gas fields, including the Leviathan field. 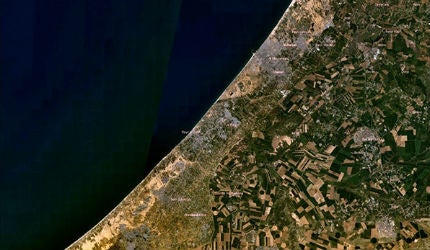 Gaza Marine gas field is located 30km off the coast of the Gaza Strip, in the eastern Mediterranean Sea. It lies at a water depth of 603m. The development of the Gaza field has been on hold for several years due to disputes between Israel and the Palestinians.

Backed by the US, the Palestinian National Authority commenced discussions with Israel in September 2012 over the possible development of the field. The start date of development is still unclear as the discussions are in early stages. The development, if undertaken, is expected to take three to four years to complete.

British Gas (BG) holds a 90% interest in the field. BG’s stake will reduce to 60% if the Palestinian Investment Fund (PIF) and Consolidated Contractors Company (CCC) decide to exercise their options. PIF and CCC would subsequently hold 30% and 10% interests respectively.

The Palestinian Authority awarded BG the exploration licence for the entire marine area offshore Gaza by in 1999. The 25-year licence provides BG with the right to explore the area, develop gas fields, and build the necessary infrastructure.

"When the concession was awarded to BG in 1999, the pre-condition was that surplus gas would be supplied to Israel."

The major hurdle for the development of the Gaza field has been the dispute between Israel and the Palestinians over Palestinian territorial waters. Under international law, the area containing the gas field belongs to the Palestinians.

When the concession was awarded to BG in 1999, the pre-condition was that surplus gas would be supplied to Israel. The country, however, was reluctant to pay market price for the gas. This created a deadlock between Israel and the developers, which hampered the development of the field. In 2007, BG ended discussions with Israel over the sale of gas that will be produced from the field.

BG drilled two wells named Gaza Marine-1 and Gaza Marine-2, which led to the discovery of the field. Based on these drilling results BG conducted a technical review for the field in 2001, which established its feasibility.

Gaza Marine is the only significant energy resource available in the region. The field is estimated to contain one trillion cubic feet of gas. It is estimated to have a life of 15 years.

The Palestinian National Authority approved the Gaza field development plan in 2002. The proposed plan included a sub-sea development and a dedicated pipeline for transporting the natural gas to an onshore processing terminal.

Benefits of the Gaza gas project to Palestine

Development of the Gaza field is expected to benefit both Israel and the Palestinian National Authority.

The project is expected to deliver economic, environmental and financial for the Palestinians. It is expected to generate substantial revenues of around $2.4bn in royalties and taxes over its life. It will also save $560m annually by eliminating the need to import electricity from Israel.

"Development of the Gaza field is expected to benefit both Israel and the Palestinian National Authority."

The Palestinians will also be able to replace the diesel currently being used by the Gaza power station with gas. This will significantly reduce the cost of electricity generation and reduce the diesel imports from Israel. Use of natural gas instead of diesel will also improve the environmental conditions.

The access to substantial gas reserves will allow the Palestinians to invest in the development of natural gas fired power plants.

The Gaza gas field is expected to supply for 10% of the energy requirement of Israel. The country currently relies on Egypt for its gas supplies. Steadily growing economy calls for access to newer sources of energy for Israel. The country is planning to purchase the gas produced by the Gaza field to reduce its dependence on Egyptian gas which is vulnerable to interruptions.

Israel is already investing in developing its own gas fields located in the Mediterranean Sea to improve its security of supply. It is currently developing the Leviathan and Tamar fields. These fields are, however, located farther from the coast and are expensive to develop.