Expand
Production at the Greater Bongkot South (GBS) field began in April 2012. Image courtesy of Total.
The field is located about 200km east of Songkhla in the Gulf of Thailand.
The GBS offshore platform construction contract was awarded to Hyundai Heavy Industries (HHI) based in South Korea. 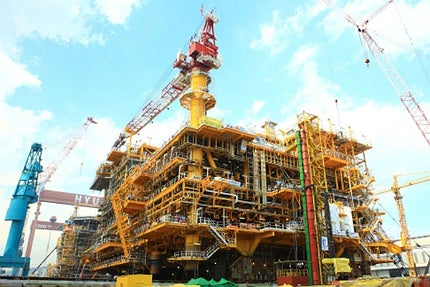 Greater Bongkot South (GBS) is a gas and condensate field located about 200km east of Songkhla in the Gulf of Thailand. The field is operated by PTT Exploration and Production (PTTEP), which has a stake of 44.45%. Other partners in the field include BG Group with a 22.22% stake and Total, with a stake of 33.33%.

The Greater Bongkot South (GBS) field is situated 700km away from the existing Bongkot North development. The GBS field is located within blocks B16 and B17 in the Gulf of Thailand.

The development of the field began in 2004 with a feasibility study conducted by PTTEP and Bongkot joint venture partners. The construction at the field began after four years. The test run on the processing facility was completed in March 2012.

“The Greater Bongkot South (GBS) field is situated 700km away from the existing Bongkot North development.”

The Processing Platform South (PPS) at the Greater Bongkot South field has a capacity of about 350 million cubic feet of gas and 15,000 barrels of condensate a day. The gas from the field is exported to the PTT grid via a newly built spur line. The condensate is exported to the existing floating, storage and offloading (FSO) vessel at the Greater Bongkot North field, located about 80km away in the north.

The three decks of the processing platform include the upper, the main or mezzanine, and the lower or emergency shutdown valve (ESDV) decks. The equipment on the upper deck includes a production separation, CO2 removal and gas compressor units. It has power generators and a heating medium system.

The main deck features equipment for gas metering and export, and a membrane pre-treatment unit. It also has a condensate stabiliser unit, a switch gear room and instrument technical room, and a condensate separation unit.

“The field has a processing capacity of 350 million cubic feet of gas and 15,000 barrels of condensate per day.”

Contractors involved with the Gulf of Thailand-based field

Hyundai Heavy Industries (HHI) was awarded with a turnkey contract in October 2008, for the engineering, procurement, installation and construction of gas process platform, jacket, flare tower and three bridges.

The construction of the quarter platform was constructed at PT Gunanusa’s facility in Indonesia. The platform was transported to the Gulf of Thailand in July 2011.

The Songkhla Basin is the largest of four Tertiary basins in G5/43, an 8,500km² block in the south-western portion of the Gulf of Thailand.

Arthit gas and condensate field is located 230km offshore of Thailand’s Songkhla province in the Gulf of Thailand.

Trell and Trine Field Development, Norway
Topics in this article:

Enduro
For over 55 years, Enduro has been a world leader...

THIS
Total Hazardous and Integrated Solutions (THIS) is an independent company...
SUBSCRIBED