Expand
The Sapinhoa oil field is located in block BM-S-9 of the Santos basin, 310km off the coast of Rio de Janeiro, Brazil.
The pre-salt Santos basin spans 800km along Brazil's coast and contains huge deposits beneath the layer of salt.
Sapinhoa was developed by a consortium consisting of Petrobras (45%), BG Group (30%) and Repsol-Sinopec (25%). 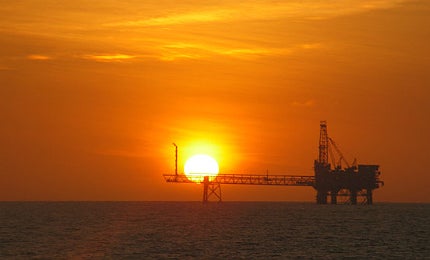 The Sapinhoa (formerly known as Guara) oil field is located in block BM-S-9 of the Santos basin, about 310km off the coast of Rio de Janeiro, Brazil. The field is situated at a water depth of 7,065ft and is estimated to contain about 1.1 billion to two billion barrels of light oil and natural gas. Discovered in June 2008, Sapinhoa was developed by a consortium consisting of Petrobras (45%), BG Group (30%) and Repsol-Sinopec (25%). Petrobras is the main operator of the field. The field started producing oil in January 2013.

“Petrobras is the main operator of the field. The field started producing oil in January 2013.”

The Sapinhoa oil field is located in the pre-salt Santos basin. The pre-salt region spans 800km along Brazil’s coast and contains huge deposits beneath the layer of salt. These deposits are situated about 3,000m under the ocean surface and another 3,000m to 5,000m under the seabed.

Exploration and production of the pre-salt region, however, witnessed complications because of the type and petrophysical features of the reservoir rocks, which included alternating microbialites and volcaniclastics.

Considering the potential of the region, Petrobras invested in a range of new technologies to develop the reserves and make them commercially viable.

The Stena DrillMAX I drilling rig, which was built by Samsung Heavy Industries in South Korea, was leased for four years to drill the Sapinhoa field. It arrived in Brazil in February 2008 and features a dynamic positioning system and can operate at depths of about 10,000ft of water.

The DrillMAX I has a storage capacity of 62,810 barrels of crude oil and 72,231 barrels of fuel oil. Its facilities include a helicopter deck, three 85t electric-hydraulic knuckle boom cranes and one 40t riser handling gantry. The rig can accommodate a crew size of 180.

In January 2010, the Sapinhoa field consortium signed an agreement with the Schahin / Modec consortium to lease and operate an FPSO on the Sapinhoa oil field for a period of 20 years. The very large crude carrier (VLCC) Radiant Jewel was converted into FPSO Cidade de Sao Paulo MV23 for use at the field.

“The pre-salt region spans 800km along Brazil’s coast and contains huge deposits beneath the layer of salt.”

In May 2011, Modec (34%), Mitsubishi (33%) and Mitsui (33%) agreed to invest in the FPSO construction. Modec was responsible for the engineering, procurement, construction, mobilisation and operation of the FPSO. The spread mooring for the FPSO was provided by Sofec.

The FPSO is designed to process 120,000bopd of oil and 180 million cubic feet of gas per day. It has an oil storage capacity of 1.6 million barrels.

The FPSO is capable of receiving up to ten producers, ten injectors and spare wells. It also has a capacity to inject 150,000 barrels of water per day.

Initial tests conducted on the Sapinhoa oil field revealed that it contained a huge quantity of high quality reserves. Considering the high potential of the oil field, a 120,000boe per day platform is to be installed.

Although Petrobras discovered the field in 2008, the amount of reserves it contains could not be revealed until 2009. In September 2009, production tests indicated the potential reserves contained. Complex technologies were required to explore the field and estimate the reserves.

Petrobras carried out further tests to determine the size of the field. In December 2010, it began a five-month EWT at the field. The output during the test was expected to reach 15,000bopd. The data collected during this test was expected to assist in developing the pilot production system. In March 2011, however, Petrobras halted the EWT due to a rupture in the riser connecting the well to the production platform.

Petrobras awarded an engineering, procurement, construction and installation contract to Saipem in May 2011 for gas export pipelines and related infrastructure.

Parker Hannifin Corporation was subcontracted by Subsea 7 in June 2011 to supply sheathed tethering lines measuring 6,000ft in length. The lines will moor submerged buoys to the seabed at the field.

In October 2011, Dresser-Rand was awarded a $700m contract by TUPI, a Petrobras operating company, to supply compression equipment for eight FPSO vessels, of which two vessels are located at Sapinhoa field.

Waimea oil field is located in the BM-C-41 block in the Campos Basin, 80km offshore of from Rio de Janeiro in Brazil. OGX, an EBX Group company, owns a 100% stake in and operates the field.

The Frade field is located 370km off of the coast of Rio de Janeiro in the Northern Campos Basin, Brazil. The heavy oil and gas field lies at a water depth of 1,128m and is estimated to contain 200m to 300m barrels of recoverable oil.