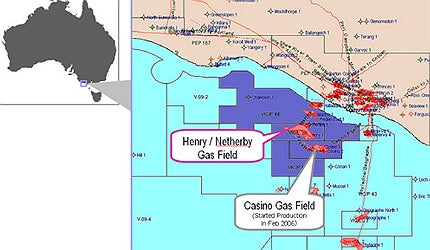 Henry and Netherby are two gas fields located in the VIC/P44 block, part of the Otway Basin. The fields lie about 30km offshore of western Victoria, in south-east Australia. They were developed in conjunction with the Casino field. The cost of developing the two fields was $275m.

"The fields lie about 30km offshore of western Victoria, in south-east Australia. They were developed in conjunction with the Casino field."

The Henry and Netherby fields are operated by Santos, which also owns 50% interest. Other stakeholders are Mitsui E&P Australia (MEPAU – 25%) and Australian Worldwide Exploration (AWE), which holds the remaining 25% interest through its subsidiary Peedamullah Petroleum.

Both the fields are connected to the adjacent Casino gas and condensate field located in block VIC/L24. The Casino field is located at about 30km offshore from the Port Campbell. It had started production in January 2006.

First gas from the Henry and Netherby gas fields was in February 2010. Reserves at Henry lie at water depths of 67m and those at Netherby are at 56m.

The produced gas is sold to TRUenergy under a 12 year gas supply agreement. It is transferred to the onshore gas facility in Iona for processing. The facility also supplies chemicals for the wellheads and manages the gas and condensate pipelines. The processed gas is distributed in the south-east Australian region.

Discovery of the Henry and Netherby wells

The Henry field is located at about 12km north of the Casino field. It was discovered in 2005. The discovery well confirmed availability of gas reserves at water depths of 250m. The first drilling well, Henry-1, was spud in 2006.

"The Henry and Netherby fields are connected to the existing offshore infrastructure of the Casino gas field."

A development and production well, Henry-2, was drilled to a depth of 2,047m in 2008. The single well was drilled to about 1,785m deep along with a subsea tie back system.

The field was considered commercially viable for development after the appraisal well, Henry-3, encountered an 18m gas bearing sandstone in the Waarre Sandstone horizon. The well was drilled to a depth of 2,100m.

Netherby gas reserves were discovered in 2008. The field is located at about four kilometres north of Henry. Development of the two fields was approved in November 2007. Construction work on the offshore facilities began in December 2009 and was completed in March 2010.

The total estimated reserves are 9.1 billion cubic metres (59 million boe). About 180 petajoules (PJ) of dry gas recoverable reserves is estimated from both the fields.

Phase I of the Greater Western Flank (GWF) development project was sanctioned by the North West Shelf Venture (NWSV) partners in December 2011.

The Henry and Netherby fields are connected to the existing offshore infrastructure of the Casino gas field. The tie back is through a 22km, 12in diameter rigid pipeline and 22km of electro-hydraulic umbilical cables built with four rigid tie-in spool pieces.

The umbilical control lines and pipeline are braced with 650 concrete mattresses and installed with pipeline-end manifolds. The project also involved installation of jumpers and other associated structures.

The 12in diameter subsea pipeline connects the subsea production trees at Henry-2 and Netherby wells to the Casino-4 well in order to connect to the shore.

The pipeline, in a double-block-and-bleed valve arrangement, allows further extensions to be carried out.

Subsea 7 was the awarded a contract worth $80m, for the engineering, procurement, installation and commissioning of the subsea pipelines and umbilicals connecting the fields.

The contract was awarded in September 2009 and the work was completed in March 2010. The contract was executed with the help of the Seven Navica pipe layer vessel and the Rockwater 2 diving support vessel.