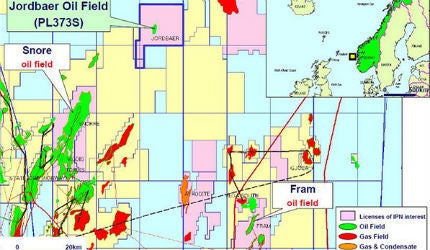 Knarr (formerly Jordbaer) oil and gas field is located in production licence 373S of block 34/3 in the Norwegian North Sea. It lies in the Tampen area, at a water depth of 1,320ft (400m).

BG is the operator of the field with 45% working interest. Partners include Idemitsu Petroleum Norge (25%), Wintershall Norge (20%) and RWE Dea (10%).

The project was approved by the Norwegian Government in June 2011. First production was achieved in March 2015. The life of the field is estimated at six to 20 years, based on oil prices and operating costs.

Discovery of the Knarr field

"The Knarr field was discovered in July 2008 by the 31/3-1S well, drilled by the Bredford Dolphin drilling rig."

The Knarr field reservoir is located at a depth of 3,800m. Hydrocarbons are found in the lower Jurassic sandstones of the Cook Formation.

In December 2011, BG drilled an exploration well 34 / 3-3 S which led to the discovery of the Knarr West prospect located 4km away from the Knarr field. A sidetrack, 34 / 3-3 A was drilled to delineate the discovery well. It encountered oil in the upper part of the Cook reservoir. The wells were drilled by the West Alpha semisubmersible drilling rig.

Development plan for the Knarr field

Knarr is planned to be developed through nine development wells. These included four production wells, two at Knarr central and two at Knarr West. The other five wells are water injectors.

"The subsea infrastructure was tied back to the Knarr FPSO, which has a capacity of 63,000 barrels a day and a design life of 20 years."

The production wells were drilled from two drill centres located at water depths of 1,345ft. Oil and gas is produced through pressure maintenance by water injection.

The subsea infrastructure was tied back to the Knarr FPSO. The FPSO has a capacity of 63,000 barrels per day and a design life of 20 years. The vessel requires maximum power of 32.85MW with topsides weighing 15,000t.

The produced oil is exported from the FPSO through shuttle tankers. Gas is exported through a new 110km-long, 12in diameter pipeline to the St Fergus gas terminal via the Far North Liquids and Associated Gas pipeline system.

Wood Group Kenny won the contract for carrying out the Front End Engineering Design for the project.

SHI-India Engineering Centre carried out the detailed engineering of the topsides of the FPSO.

Teekay Corporation has been awarded the engineering, procurement and construction contract for the FPSO. The contract is valued at $1bn. The vessel was built by Samsung Heavy Industries in South Korea and operates under a charter contract for a period of six or ten years with options up to 20 years.

The subsea equipment for the field was supplied by FMC Technologies under a $135m contract. FMC supplied subsea production trees, water injection trees, control modules, wellheads, manifolds, and other equipment.

Aptomar received a five-year contract in April 2015 to provide field monitoring services at the Knarr field.

Samsung Heavy Industries received a contract worth approximately $836m to fabricate topsides for the processing and riser platforms, in June 2015.

In July 2012, Subsea 7 was awarded a $400m contract for the design and construction of a 4.5km-long flowline bundle for the Knarr offshore project.

Rosenberg WorleyParsons was subcontracted by Subsea 7 to fabricate 12 tie-in spools, in April 2013. FES was subcontracted to supply automatic diverless bend stiffener connectors (DBSCs) to NOV/Subsea 7 for the FPSO vessel in the field.

DOF Subsea was subcontracted for installation of mooring, tow-out and hook-up work for the FPSO vessel.

Control Seal is a unique challenger in the valve business...

Founded in 1934 as an industrial venture in Reykjavík to...

Competentia and our US consulting arm, Argonauta, provide the most...

The oceans between European and American oil and gas companies

The Lucius oil field is located in the Keathley Canyon block in the Gulf of Mexico. Anadarko Petroleum operates the…

The Bozhong 19-6 field is considered to be the world’s first large-scale, high-yield, mono-block gas and condensate field. Located in…

04 Mar 2021
Registration is disabled.
We use cookies to ensure that we give you the best experience on our website. If you continue to use this site we will assume that you are happy with it.ContinueLearn more