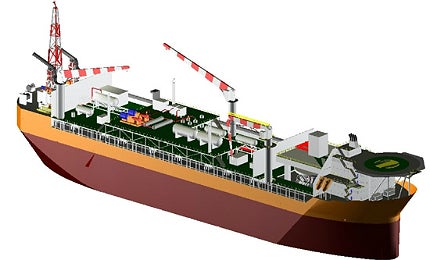 In 2007, BP submitted a plan for the joint development for the fields. Production from the Skarv field started in December 2012. The field is expected to produce 125,000 barrels of oil equivalent per day (boe/d) by the mid-2013.

Gas and oil reserves of the offshore Norwegian fields

"In 2007, BP submitted a plan for the joint development for the fields. Production from the Skarv field started in December 2012."

The four-year contract included the detailed design, project management and supply of equipment. The main work took place in Haugesund and Billingstad in Norway, Aberdeen and Nailsea in the UK.

"BP awarded the $400m contract for fabrication of the Skarv FPSO hull to Samsung Heavy Industries in South Korea."

Aker Kvaerner had won the NKr100m front-end design job for the new floating production facility as well as the overall system design for the field and preparation for procurement and project management of the total field development.

BP awarded the $400m contract for fabrication of the Skarv FPSO hull to Samsung Heavy Industries in South Korea. The FPSO has a length of 292m, breadth of 50.6m and is 29m deep. The hull weight, including living quarters, which accommodate 100 people in single cabins, is 40,600t. The hull was delivered in 2010. The FPSO has an oil production capacity of 85,000 barrels a day and gas production capacity of 19 million cubic metres per day.

Quayside systems installed at the Skarv and Idun fields 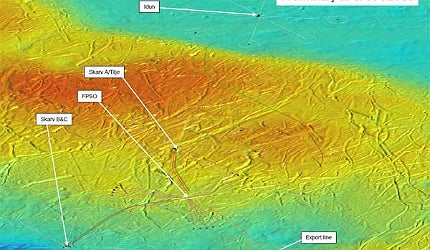 Seabed topography of the offshore area

Samsung in Goeje Island, South Korea, also won the $350m contract for the FPSO topside fabrication and installation (TFI) – including around 16,000t of topsides systems. The contract covered fabrication of six main modules, each weighing approximately 2,500t, and the flaretower, which was mounted on the FPSO in a yard on completion of the passage from the TFI yard.

On completion of fabrication and quayside commissioning activities the modules were installed on the Skarv FPSO deck. In addition to the work associated with mounting the flare in an onshore yard, the vessel’s five thrusters were also fitted, after undergoing a trial fit and removal for the voyage.

The construction of the topsides modules started with first steel cutting in December 2008, and the complete FPSO left South Korea by the end of 2010.

The Yme field is located in the Egersund Basin, 100km off the coast of Norway. It lies at a water depth of 93m in blocks 9 / 2 and 9 / 5 in the south-eastern region of the North Sea.

The Stella oil and gas field is located in the UK section of the Central North Sea.