Gulf of Mexico, US 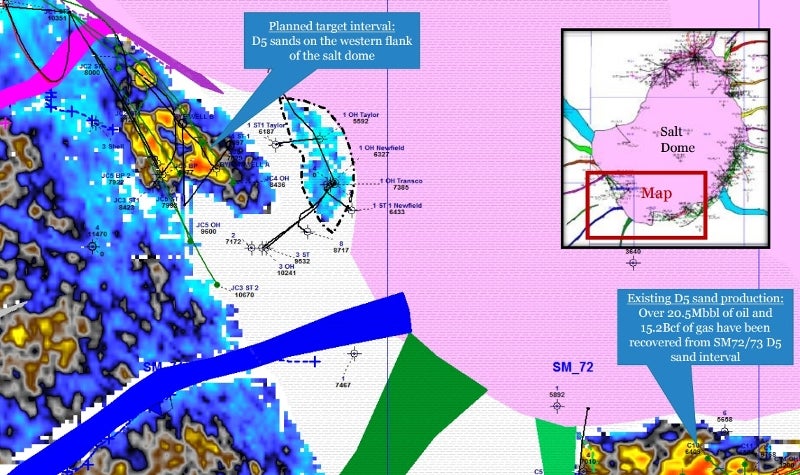 The discovery lies in 131ft of water, approximately 250km off the shore of Louisiana, US, and is jointly owned by Byron Energy (50%) and Otto Energy (50%), with Byron also serving as the operator.

It has been classified as a high-potential, low-risk prospect with significant upside potential.

The developers plan to launch initial test production by the end of 2017, followed by further development.

The discovery well was drilled in order to test two reservoir sands located on the south-west part of a large salt dome, including D5.

Porosity logs from the well indicated the presence of very high-porosity gas between the depths of 7,212ft and 7,226ft.

The SM-71 #1 well was suspended at the mud line to enable future production.

Geology and reserves of the Gulf of Mexico field

SMI-71 field reservoir is of the Pleistocene to Pliocene age and is estimated to contain proven and probable reserves of 4,542 million barrels of oil-equivalent (Mboe).

A manned tripod platform structure with a capacity of 4,500 barrels of oil per day (bopd) and 5.0 million metric cubic feet a day (Mmcfd) of gas is planned to be installed to bring the field into production. The platform can accommodate six production wells.

The SM-71 #1 well will be completed as a development well with a production liner to bring the field into operation, and the D5 sand interval will be initially targeted for production.

Initial flow rates from 1,500bopd to 2,000bopd are expected to be achieved.

A maximum of four additional wells are planned to be drilled following completion, which will target the B65 interval overlying the D5 interval and has significant upside reserve potential based on seismic data.

All the components required for the platform have been ordered and modifications are nearing completion.

Adjustments to the jacket, deck, boat landing and production equipment are being carried out to enable production, and the platform’s installation at the field is currently planned for the fourth quarter of 2017.

The platform will separate the produced oil and gas, which will be exported through oil and gas trunk lines located near the field.

The fields’ future wells are planned to be tied back to an existing production platform via an 8in-diameter surface or subsurface flowline.

Laredo Construction has been contracted to supply the tripod platform structure and carry out the necessary modifications.