9.6 million barrels of oil and 1.3 trillion cubic feet of gas 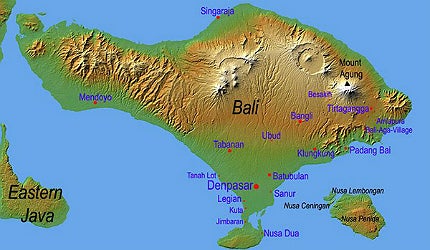 Terang gas field is located at a water depth of about 90m in the east Java Sea in the Kangean PSC block, Indonesia. It is being developed as part of a larger project, called the TSB gas field complex, which constitutes the development of three gas fields named Terang, Sirasun and Batur.

The Terang field is operated by Kangean Energy Indonesia (KEI), which is a wholly-owned subsidiary of PT Energi Mega Persada (ENRG).

ENRG owns 50% interest in the field, while Mitsubishi Corporation and Japan Petroleum Exploration Company (Japex) hold 25% each. Commercial production at the field started in May 2012.

“The field is situated in the north Bali basin above a major subduction zone, which has an extensive seismic and volcanic activity.”

Terang field was discovered in February 1980. The appraisal well drilling began in March 1990 and continued until June 1990. First production of gas at the field occurred in 1994.

The development at the Terang field began in January 2010 with the drilling of five production wells and installation of a subsea production system.

The field is situated in the north Bali basin above a major subduction zone, which has an extensive seismic and volcanic activity.

The location of the field is subject to many geological hazards such as shallow gas, slope instability, fault rupture, liquefaction and earthquake shaking.

Gas and oil reserves and production

The field has proven and probable reserves of about 9.6 million barrels of oil and 1.3 trillion cubic feet of gas. It is expected to produce about 300 million metric cubic feet of gas each day (MMcf/d).

The annual gas production at the Terang field is expected to be about 2.25 million tons, which is equivalent to 50,000 barrels of oil each day. The entire gas output of the field will be used for the domestic consumption in Indonesia.

Gas exportation from the Indonesian field

Gas produced at the field is gathered in a floating production unit (FPU) and then supplied through the east Java gas pipeline for exportation. The FPU has been contracted to support the field’s operations until 2022. The export pipeline, built in 1993, is 28 inches in diameter and 357km long.

“The field has proven and probable reserves of about 9.6 million barrels of oil and 1.3 trillion cubic feet of gas.”

In July 2010, a consortium of BW Offshore, which included PT Pelayaran Trans Parau Sorat and PT Energi Consulting Indonesia, was awarded an $875m contract to supply the FPU.

The scope of the contract included delivering the floating production, storage and offloading vessel (FPSO), risers, umbilicals and mooring system at the field. The contractual scope also included installation and operation of the unit. The contract was awarded for a period of ten years, with an option to be extended by a maximum of a further four years.

Instead of building a new FPSO, the contractor has converted BW Genie, an Aframax tanker, into an FPSO named BW Joko Tole at the Sembawang Shipyard in Singapore.

The conversion was completed in March 2012, and the vessel was deployed to TSB in April 2012. In June 2012, BW Joko Tol received first gas from the TSB Complex. The FPSO has a capacity of 340Mmcfd of gas compression and conditioning.

Contracts awarded for the Terang field

The Oyong oilfield is situated eight kilometres off the coast of Madura Island in the East Java region of Indonesia.

In August 2010, BW Offshore awarded a $20m subcontract to Kongsberg Maritime for an automation, control, engineering and telecom (ACET) package on an engineering, procurement and construction (EPC) basis for the TSB field gas FPSO.

The scope of the contract included providing the design, engineering, manufacturing, testing and supply of all materials. It also provided accessories and tools required for the complete integrated automation, control, E-House and electrical hardware.

Cables International was awarded with a contract for the completion of on-site cables management supervision of major FPSO conversion at the TSB Complex.

APL, a division of BW Offshore, was awarded with a contract to provide design, fabrication and installation of the mooring system at the field.

Lying in water depths of 2,400ft to 3,400ft, the West Seno field is Indonesia’s first deepwater development. It lies in the Makassar Strait PSC off Kalimantan, on the continental slope of the northern Mahakam Delta and 50km from the Attaka field. It is operated by Unocal.