120 billion cubic feet of gas and 4.7 million barrels of condensate 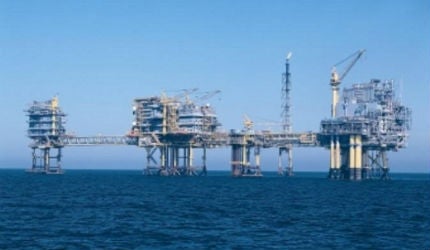 Trym gas and condensate field is located in production licence 147 of Block 3/7 in the southern part of the Norwegian North Sea. The field is located just 3km from the Danish continental shelf. Water depth in the area is 65m.

Trym has been producing hydrocarbons since February 2011. It is operated DONG Energy which also owns 50% interest in the field. Bayerngas Norge holds the remaining 50% interest.

Life of field is estimated at 17 years.

The Trym field was discovered by Shell with the drilling of the 3/7-4 discovery well in 1990. The well flowed at the rate of 29.6 million cubic feet per day of gas and 3,800 barrels per day of condensate.

Geology and reserves of the Trym gas and condensate field

The field is estimated to contain recoverable reserves of 120 billion cubic feet of gas and 4.7 million barrels of condensate.

Trym field was not developed for a long time partly due to low market prices at the time of discovery.

Shell submitted a field development plan to the Norwegian authorities for the Trym field in 2006. The plan included the development of the field through a tri-lateral subsea template including two horizontal wells tied back to the Harald platform. The authorities rejected the plan, after which Shell and its partners sold their interest in the field to Dong Energy and Bayerngas.

DONG Energy submitted a new plan for development and operation (PDO) of Trym to the Norwegian authorities in October 2008. The PDO was approved by the authorities in March 2010.

The European Investment Bank awarded a €150m ($210m) loan in October 2010 for the development of the field.

Gas and condensate at Trym are produced through two horizontal production wells using natural pressure depletion. The recovered hydrocarbons are sent through a multiphase pipeline to the Harald platform located 5.5km away, for processing.

The Harald platform is operated by Maersk Oil and is located on Danish waters. Trym is the first Norwegian field to be connected to infrastructure offshore Denmark.

Aker Solutions was the engineering, procurement and construction (EPC) contractor for the project. The scope of supply under the Nrk400m ($66m) contract was the EPC of the entire subsea production system including trees, umbilicals, manifolds, wellheads, risers, and a four slot template. The subsea system was manufactured under Aker’s RapidSolution programme.

Ramboll provided detailed design and installation services for the tie-in of the Trym field infrastructure with the Harald platform.

Discovery of new prospects near the Trym field

DONG Energy completed the drilling of a wildcat well 3/7-8 S in March 2013. The well was drilled 2km south of the Trym field to a measured depth of 4,143m, using the Maersk Giant rig.

"Aker Solutions was the engineering, procurement and construction (EPC) contractor for the project."

The wildcat well was drilled to prove hydrocarbons in the Middle Jurassic sandstones. It encountered a 159m oil and gas column in the Sandnes and Bryne formations. The Trym South discovery is estimated to contain one to two million standard cubic meters of recoverable oil equivalents. The wildcat well also struck the Maureen formation which was dry.

Data and samples from the wildcat well have been acquired. The discovery will be further assessed to check for its commercial viability. The discovery well will be plugged and abandoned.