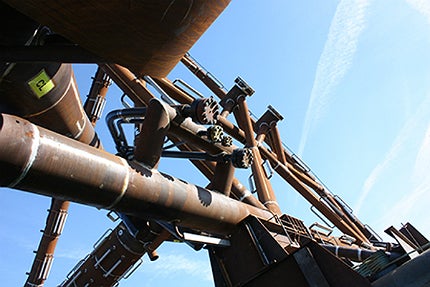 Tyra Southeast Oil and Gas Field is located in block 5504/12, approximately 220km offshore of the west coast of Denmark in the North Sea, at a water depth of 38m.

The operation of the oil and gas field comes under the jurisdiction of the Danish Underground Consortium (DUC), with Maersk Oil as the operator, holding a 31.2% interest. Other partners are Shell, holding a 36.8% share, Nordsofonden holding a 20% share and Chevron holding a 12% share.

A major expansion project is currently underway at the oil field to enable it produce a further 50 million barrels of oil equivalent. The field, upon completion of the expansion, is expected to produce oil and gas for 30 years. Production from the expansion commenced in March 2015.

"The operation of the oil and gas field comes under the jurisdiction of the Danish Underground Consortium (DUC)."

The field was developed as a satellite to the Tyra Field with an unmanned platform. The production is separated into gas and liquids, which are transported to Tyra East (TE) via two pipelines for further processing. Production from the field started in 2002.

The expansion project will enable the field to produce 20 million barrels of oil and 170 billion standard cubic feet of gas.

The field is expected to reach its peak production in 2017 delivering approximately 20,000 barrels of oil a day.

Expansion of the Danish oil and gas field

A plan to further develop the field was submitted to the Danish Energy Agency in August 2012. The field development plans were approved in November 2012. Maersk Oil announced the expansion plan in April 2013.

"A plan to further develop the field was submitted to the Danish Energy Agency in August 2012."

The expansion involves the installation of a new unmanned platform, a bridge to tie-in the existing Tyra central processing platform, wellheads and wellheads structures, and the drilling of 12 additional wells.

Development and infrastructure of Tyra Southeast

Tyra field was discovered in 1968 and started production in 1984. The field has reserves of roughly 1.25 trillion cubic feet. It currently comprises 22 gas wells, 29 oil and gas wells and 18 injection wells.

The field has two platform composites, namely Tyra West and Tyra East. Tyra East is equipped with two fixed wellhead platforms capable of accommodating 96 people, one processing and accommodation platform, one gas flare stack, one riser platform and facilities for the final processing of gas, oil, condensate and water.

The first contract for the expansion project was awarded to Bladt Industries to design and construct the Tyra Southeast unmanned platform. Under the engineering, procurement and construction (EPC) contract, the company constructed the four-legged jacket and bridge linking the new platform with the existing one, and a 16-slot wellhead topside weighing 1,100t. The facilities were built at the company’s quayside in Aalborg, Denmark.

Ithaca Energy operates the site and owns a majority stake in the field, which lies in blocks 30/6 and 29/10 NE Upper.

The Norwegian oil and gas projects pulling in investment

Embattled and embrittled: how the offshore industry is tackling hydrogen embrittlement

Around the world: how has Covid-19 affected offshore exploration?

Mariner oil field is located approximately 150km east of the Shetland Islands, primarily in Block 9/11a in the northern North…

Bayan oil and gas field is located in sub-block 4Q-21 of the Balingian Province at a water depth of 28m,…

Grasel oil field is located within the Skarv area above the Skarv reservoir, approximately 210km offshore Sandnessjøen on the Norwegian…

24 Dec 2020
Registration is disabled.
We use cookies to ensure that we give you the best experience on our website. If you continue to use this site we will assume that you are happy with it.ContinueLearn more