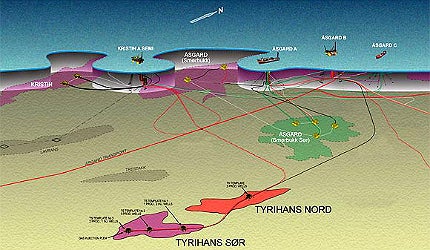 Tyrihans is located in the Halten Bank area of the Norwegian Sea, 35km south-east of the Kristin field, in roughly 285m of water.

Drilling in the Tyrihans field began in April 2008 and it was not until 8 July 2009 that the production had commenced. The production at the field is expected to last until 2029. The field was officially opened in March 2011.

Recoverable reserves are put at roughly 186 million barrels of oil and condensate, and 41.5 million cubic metres of rich gas. Statoil has a 58.84% interest. Its partners are Total E&P Norge with 23.18%, Eni Norge with 6.23% and Mobil Development Norway with 11.75%.

Exporting the rich gas and liquid

“The production at the field is expected to last until 2029. The field was officially opened in March 2011.”

In July 2005, Statoil submitted a PDO (Plan for Development and Operation) for Tyrihans and began procurement. A 43km pipeline carries the wellstream to the Kristin platform for separation.

The rich gas from both fields, Tyrihans and Kristin, is then exported via the Åsgard Transport system which runs to Kårstø, north of Stavanger. There, the gas is processed before its onward transmission to European customers.

Meanwhile, the liquids production – condensate and crude – is combined with Kristin output after stabilisation and piped to the Åsgard C storage ship for export by shuttle tanker.

Development of the Norwegian field

Tyrihans has been developed with a total of 12 wells, some multilateral, breaking down to nine for production, two for gas injection and one for the injection of unprocessed seawater. The wells also include the use of smart well technology for improved recovery from subsea-completed fields.

All the wells are connected to five subsea templates. Statoil had entered a three-year, NOK2bn agreement to use the Transocean Arctic semisubmersible for drilling and completion. Subsea pumps are used for injection of seawater, while gas is injected from the Åsgard field.

Subsea system and Åsgard B pipeline

The seabed installations on the field were carried out in 2007. All the 12 wells are held with the help of four production frames, which are in turn connected to the Kristin pipeline. Gas supply for gas injection and gas lift in the production wells is compensated from the Åsgard B pipeline.

The planning of gas injection has been done to last until 2015. Injection of sea water for pressure support is done through a subsea facility.

The pipeline for the wellstream is made of special steel. It consists of an outer carbon pipe and an inner stainless steel pipe. This is the first time that Statoil has installed such a pipeline.

The Åsgard B platform required modification, as did Kristin, although some modifications were made while the platform was under construction. A 250t processing module was built and installed on the platform in 2008.

Statoil awarded a NOK300m contract to Butting of Germany for the delivery of steel pipe for the pipeline linking Tyrihans with the Kristin platform. The pipeline was successfully delivered in December 2006. Ramboell Denmark conducted the engineering for the pipelines and their routes.

“The rich gas from both fields, Tyrihans and Kristin, is then exported via the Åsgard Transport system which runs to Kårstø.”

Stolt Offshore (Acergy) was awarded with a NOK550m contract to lay two pipelines from Tyrihans to Kristin.

Statoil awarded FMC Kongsberg with a $225.4m contract for the subsea systems. This covered assistance and maintenance of the facility during installation and operation.

In May 2012, Statoil was provided consent by the Petroleum Safety Authority Norway to deploy the Transocean Searcher semisub for re-completion of 6407/1A-4-H well. The well is located in production license 091 and is expected to be re-completed by March 2013.

Statoil was also granted approval for using Transocean Leader semi-submersible drilling vessel in November 2012 for deployment on the Tyrihans field. The vessel will be used for drilling of production wells in the 091 license. The work is expected to start in December 2012.

In November 2012, FMC Technologies won an order worth about $39m to deliver a pair of subsea trees and three choke modules in 2013.

Wire line tractor services for Tyrihans and Statoil’s other fields in the Norwegian Continental Shelf will be provided by Aker Well Services as part of a $65m contract awarded in October 2012.

The Valemon field is located between production licence 050 and 193 in the Norwegian Sea.

The Åsgard oilfield lies on the Haltenbank in the Norwegian Sea, 200km offshore Norway and 50km south of Statoil’s Heidrun field.