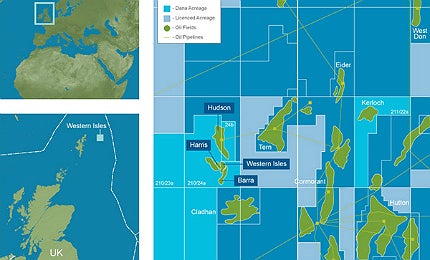 The Western Isles Development (WID) Project is located in Block 210/24a, in the northern North Sea, UK. The project involves the development of two oil fields, namely Harris (earlier East Rinnes) and Barra (earlier Melville), which are located 160km east of the Shetlands.

“The project is expected to have a plateau production rate of approximately 44,000 boepd in full production mode.”

The oil fields are situated in a water depth of 165m and a reservoir depth of 6,000ft. Aberdeen-based Dana Petroleum is the operator of the WID Project, with an equity share of 77% in block 210/24a. Dana Petroleum is a subsidiary of Korea National Oil Corporation (KNOC). CIECO Exploration and Production (UK) (CIECO, London, UK), a subsidiary of ITOCHU Corporation, owns the remaining 23% equity in the project.

The estimated investment in the Western Isles Development Project is $2bn. The UK Department of Energy and Climate Change (DECC) approved the WID Project in December 2012.

Drilling works commenced in September 2013, two months ahead of schedule, by Diamond Offshore’s drilling rig Ocean Nomad. First oil was produced in November 2017. The field life is estimated to be 15 years.

Oil at West Rinnes and East Rinnes areas in Block 210/24a was found in 2008. Both the discovery wells were found to have high standard oil, Brent reservoir sands and 78,000 barrels a day of flow rate.

Two more oil discoveries were made at South East Rinnes and South West Rinnes to the south-west of Hudson oil field in 2009.

The oil reserves at the two offshore fields of the WID project are estimated to be 100 million barrels of oil equivalent (Mboe), out of which 45Mboe can be recovered feasibly.

The wells are connected to a new floating production, storage and offloading vessel (FPSO). The new FPSO was designed using Sevan Marine’s technology and was constructed by Cosco. The cylindrical FPSO is 90m-wide, weighs more than 28,000t, and has a production capacity of approximately 44,000 barrels of oil a day, with an additional tank storage capacity of roughly 400,000 barrels.

“Drilling works commenced in September 2013, two months ahead of schedule. Installation of subsea systems began in 2014.”

Dana awarded a £8m ($12.4m) contract to Aker Solutions in November 2011, for the management, engineering, procurement and construction of subsea facilities for the project. Aker Solutions supplied and installed nine subsea control modules, topside power units and other associated subsea infrastructure as part of the contract.

In July 2012, Dana Petroleum selected Sevan Marine’s FPSO technology to design the new FPSO for the project. Dana also signed a service and license agreement with Sevan Marine in this regard in December 2012.

Furgo was contracted by Dana Petroleum to deploy an FCV 600 remotely operated vehicle (ROV) for drilling services at the WID project in March 2016.

Scotland-based company EnQuest is redeveloping the Ardmore field (known earlier as the Argyll field) located in the central North Sea.