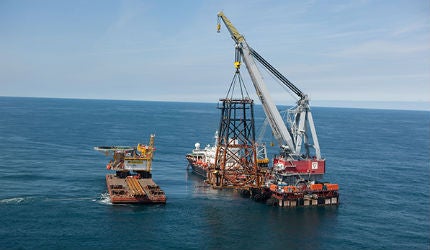 Wingate is a shallow water gas field located in Block 44/24b of the British Continental Shelf in the southern North Sea. The field is situated approximately 110 miles (177km) from the UK coastline and about 6.5 miles (10.5km) west of the British / Dutch median line. The field was brought onstream in October 2011.

The Wingate project is owned by a consortium comprised of Wintershall Noordzee, Gazprom Germania, Exxon Mobil, and Gas-Union.

Wintershall, Germany’s largest crude oil and natural gas producer and a wholly owned subsidiary of BASF, operates the field through its subsidiary Wintershall Noordzee and owns 49.5% working interest in the project.

Gazprom Germania, a wholly-owned subsidiary of GAZPROM and the world’s largest natural gas producer, has 20% stake in the Wingate development. Exxon Mobil and Gas-Union have working interests of 15.5% and 15% respectively in the field.

“The field is currently being exploited through one production well, which is designed for initial production of one and a half million cubic metres of natural gas per day.”

Wintershall won the 44/24b concession block in 2004 during the 22nd offshore licensing round. The Wingate discovery was made in October 2008 through the exploration well 44/24b-7z. The natural gas was found in Westphalian B sand bodies.

As per 2011 estimates, the Wingate field will produce about 1.11 billion cubic metres of dry gas per annum. The anticipated operational life of the field is 15 years.

Juliet is a shallow water gas field situated in the block 47/14b of the UK Continental Shelf in the southern North Sea, at a water depth of 193.6ft.

The field development plan for the Wingate discovery was approved by the UK Department of Energy and Climate Control (DECC) in September 2010.

The field is planned to be exploited by a total of six gas producing wells tied to a normally unattended installation (NUI) known as the Wingate platform. Gas and condensate from this production platform is transmitted to D15-A platform, located in the Dutch waters of the North Sea and operated by GDF-Suez, through an export pipeline measuring about 12.5 miles (20.1km) in length and 12in in diameter.

The export pipeline is piggybacked by a two inch pipeline to supply methanol to the production platform for hydrate inhibition. The two pipelines are fabricated from carbon steel and are coated with three layers of polypropylene to avoid corrosion.

The compressed Wingate gas from D15-A platform is further routed to the Dutch mainland near Uithuizen, via the Noordgastransport (NGT) pipeline, for treatment.

Construction on the project was started in the third quarter of 2010 with installation of the export pipeline. The Wingate field was put into production in October 2011 with the first production well drilled by Ensco 80 drilling rig.

Development drilling for the second production well was started in October 2011 and was completed in April 2012 by the same rig.

Details of the Wingate production platform

The fully automated Wingate platform, installed with Honeywell‘s Experion process knowledge system, is controlled from Wintershall’s remote control room located in Den Helder, the Netherlands. The platform was constructed in about ten months in dry-docks situated in Dordrecht and Ridderkerk.

The unmanned production platform is fastened to a four legged, piled steel jacket. It rises 45m from the bottom of the sea and is designed to support up to half a dozen production wells. The platform is approximately 1,200m2 (12,916ft2) in size, with deck weighing about 950t. The total length of the facility from top to bottom is 70m.

The platform is also provided with facilities to accommodate up to eight crews during planned maintenance visits. The crew accommodation quarters are divided over four cabins.

Power is supplied to the platform by a turbine based mini gas power station which produces electricity directly from the extracted gas.