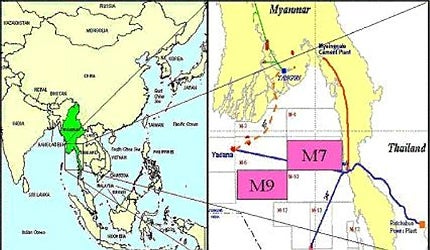 Zawtika project includes the development of the Zawtika, Kakonna and Gawthaka fields, located in blocks M9 and M11 of the Gulf of Martaban, offshore of Myanmar. The project is spread across an area of 11,746 square kilometres.

Petroleum Authority of Thailand Exploration and Production International (PTTEP International) is the operator of the project. PTTEP owns an80% interest in the project, with Myanma Oil and Gas Enterprise (MOGE) holding the remaining 20%.

The $2bn project initially started delivering natural gas for domestic purpose in Myanmar in March 2014 at a rate of approximately 60 million standard cubic feet per day (MMscf/d). In August 2014, it started exporting natural gas to Thailand at a rate of 240MMscf/d.

Discovery and geology of Myanmar’s fields

“Petroleum Authority of Thailand Exploration and Production International (PTTEP International) is the operator of the project.”

All the three fields of the project were discovered in 2007. Zawtika was discovered by the Zawtika-1 well in 2007. It hit seven significant gas reservoirs and accumulations.

Gawthaka was discovered by Gawthaka-1 well, which was drilled to a depth of 3,380m and flowed at the rate of 9.4MMcfd.

Drilling of the Kakonna-1 well led to the discovery of the Kakonna field. The well indicated a link between the northern and southern parts of Block M9. It flowed at the rate of about 21.2MMcfd and 8.6MMcfd during two tests.

The Zawtika project fields are biogenic gas formations consisting of reservoirs of Miocene-Pliocene Delta Front sandstones, located at a depth of 750m to 1,580m, and shallower reservoirs in the Pleistocene strata at depths of 500m.

Drilling and appraisal of the Burmese gas fields

Zawtika-2 well, located in the southern part of Block M9, was drilled to a depth of 3,500m. It encountered significant quantities of natural gas in six zones and flowed at the rate of 109.5 million standard cubic feet a day.

Zawtika-5 encountered seven natural gas zones and flowed at the rate of 38.36MMcfd. In 2010, PTTEP drilled two appraisal and one exploration wells.

The project is planned to be developed in phases. The first phase of the project included the installation of three wellhead platforms, an integrated processing and living quarters, and 21km of subsea pipelines with 18in diameter.

Nearly 80% of the produced natural gas will be exported to Thailand through a 28in diameter, 300km long pipeline. About 230km of the pipeline will be laid offshore, while the remaining 70km will be onshore.

Contracts awarded for the gas fields

Situated in the Andaman sea, the Yadana gas field is around 60km offshore from the nearest landfall in Myanmar.

Larsen & Toubro Valdel Engineering was awarded a $200m contract to carry out the detailed engineering and design for the first phase of the project. The contractual scope included the three wellhead platforms and related equipment. Larsen & Toubro subcontracted EPConsult Energies to carry out safety, risk and reliability studies for the project. The platform installations were completed in the first quarter of 2013.

SMOE was awarded a $600m contract for engineering, design, construction and installation of the processing and accommodation platform. China Petroleum Pipeline Bureau won a $180m contract for the onshore export pipeline and facilities.

Process Group was subcontracted by SMOE to supply a produced water treatment package and a fuel gas package.

Bredero Shaw, a unit of ShawCor, won a $600m pipeline coatings contract. Under the contract, Bredero Shaw provided anticorrosion coating and concrete weight coating for the pipelines used for the project.

FMC supplied restriction orifice plates and spools. Sound Environmental carried out noise and vibration studies for development of the field.

Arthit gas and condensate field is located 230km offshore of Thailand’s Songkhla province in the Gulf of Thailand.

Manora oil field is located in the G1/48 concession of the Gulf of Thailand. It lies in 50m of water approximately 75km from the coast of Thailand.