In Association with Texaco Lubricants

Thomas von Eller-Eberstein manages a mixed agricultural business, together with his wife Anja-Catrin in Visselhövede, Germany. Since 2011, this family-run operation has included a biogas plant with a 250 kW MAN gas engine. In May 2020, the Eller-Eberstien family decided to add a second larger engine, a latest generation MAN E 3248 LE 222 offering 360 kW and fitted with four-valve technology, to the bioplant site.

MKP Service GmbH exclusively uses Texaco Lubricants in its repair and maintenance work, swapping factory-filled lubricants from other manufacturers to Texaco HDAX oils. Download this whitepaper to find out why.
By Chevron 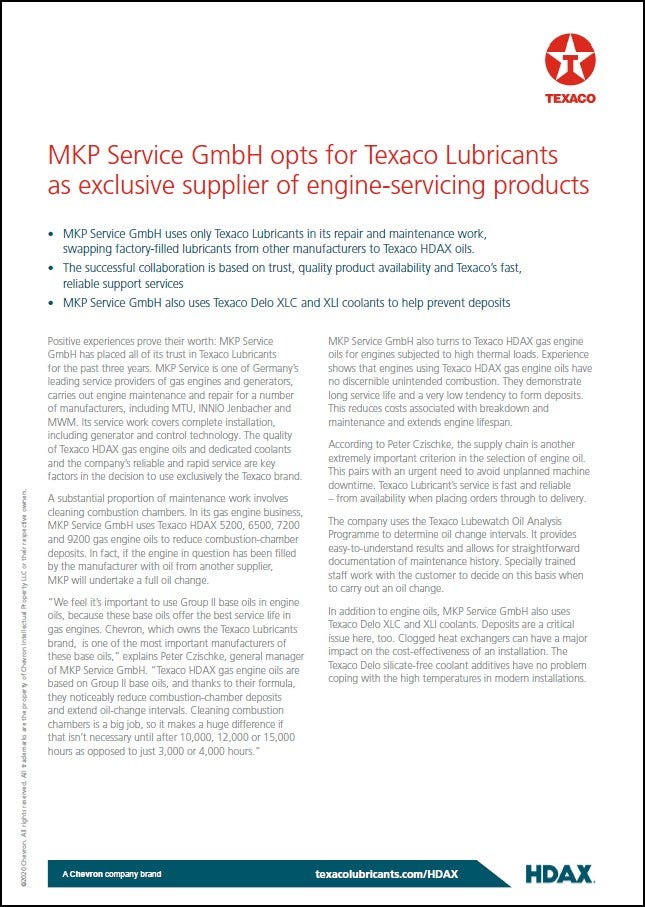 Thank you.Please check your email to download the Whitepaper.

All electrical energy produced by the TACT Von Eller-Ebersteinsche BGA GbR biogas plant is fed directly into the grid, with the family heating its stables and residential buildings with the heat energy that is produced. The new larger MAN engine is now 90 per cent online, with the older smaller engine still able to be utilised as required.

Before the larger engine was commissioned, the plant’s service partner, BSplus recommended Texaco HDAX 9500 high-performance gas engine oil to the Eller-Ebersteins. BSplus from Oldenburg Münsterland in Germany has relied on quality Texaco products for over six years, and knew from their experience that Texaco HDAX 9500’s advance technology would complement the new engine.

As recommended, having changed the new ‘break-in oil’ after 200 to 300 hours as required, the farmer took the advice of Texaco Lubricants’ and performed oil analysis on the larger engine.

This was a new experience for Thomas von Eller-Eberstein, who said, “I used to only change oil in the older, smaller engine every 400 hours as standard, so I was excited to find out the results of the oil analysis when testing our newer and larger engine.”

After completion of the initial ‘break-in oil’ change, the new oil was analysed, this time using Texaco LubeWatch oil analysis programme. Eller-Eberstein added, “I was constantly in touch with our Texaco Lubricant contract partner, Michael Gülck, and I was pleasantly surprised when the results still showed positive benefits after 1,000 hours. The data was excellent. In the second round of tests, the analysis showed that some 2,500 operating hours could be

achieved. This was over six times more efficiency for the plant as I compared the 400 hours of the smaller engine with the 2,500 operating hours of the new and larger engine.”

Following MAN guidelines, the oil service life was reached with oil-level monitoring deactivated. This makes it possible for the engine manufacturer to measure the oil performance without adding fresh oil. Furthermore, in an extensive field test after 7,000 operating hours, a variety of pistons and cylinder heads were disassembled and handed over to MAN for analysis. The manufacturer then evaluated the deposit- and wear-pattern of the components according to a number of predefined categories. The result showed all examined components met the strict requirements set by MAN with Texaco HDAX 9500 receiving approval for MAN engines (MAN M 3271-5 standard).

Along with Texaco HDAX 9500, the TACT Von Eller-Ebersteinsche BGA GbR operation also banks on silicate-free Texaco Delo XLC Antifreeze/Coolant. This coolant actively helps combat deposit buildups to aid heat transfer, so that oil temperatures are kept a few degrees cooler than found in traditional coolants, leading to a positive effect on the system and its operation.

Thomas von Eller-Eberstein said he is satisfied with his decision to switch the larger engine to Texaco Lubricants. He concluded, “When using the oil there is no cause for concern. I do not need to worry about runtime, durability, or oil-change intervals. Simply put, it is easy and stress-free — that was especially important for me. Moreover, regular maintenance is performed by service partner, BSplus every 1,800 hours. Everything has run smoothly and seamlessly so far.”

MKP Service GmbH exclusively uses Texaco Lubricants in its repair and maintenance work, swapping factory-filled lubricants from other manufacturers to Texaco HDAX oils. Download this whitepaper to find out why.
By Chevron