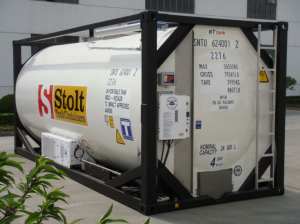 Celebrating 30 years of expertise in the design and manufacture of transport refrigeration containers, Klinge Corporation was featured in Tank Container Magazine, which supplies the global tank container industry with research, editorials, interviews with major executives from within the industry and in-depth analyses.

Klinge Corporation vice-president Allan Klinge was interviewed by journalist Katerina Kerr and the article was published in the Fall edition of Tank Container Magazine.

The article detailed how the company was established in 1984 when it was purchased from York Borg Warner, but that the roots of the company went back to the mid-1940s when Allan’s late grandfather, Paul Klinge, started a trading business in Denmark.

The company expanded its business to refrigeration and became agents for York Borg Warner’s marine transport division in 1972. After producing transport refrigeration equipment in Denmark, Klinge bought the division and renamed it Klinge Corporation.

In the feature, Mr Klinge also discussed the company’s production of glycol-based heating and cooling systems for tank containers and the focus on making the system as small and lightweight as possible. This allows customers to transport the maximum amount of cargo while providing the amount of capacity necessary to maintain the required temperature.

Klinge Corporation’s TCR-109 model is the standard refrigeration unit for tank containers. The unit is side-mounted and is used by companies worldwide to transport hazardous and non-hazardous chemicals, pharmaceuticals, food products and beverages.

The company also provides more specialized units, such as a dual tank refrigeration unit to transport certain dangerous goods that are subject to the stringent regulations of the IMDG Code. The model, TCR-262, is a nose-mounted dual unit that has two independent microprocessor thermostats that control and monitor the cargo temperature. This model is also available with an integral generator set for back-up power supply.

Over the course of Klinge Corporation’s three decades of design and production of state-of-the-art refrigeration units for the tank container industry, the company also produces specialized transport refrigeration, freezing and power generation equipment for the following industries:

Klinge Corporation is announcing a new model of their standard tank container heating unit, the...

Today, South East Asia is one of the most active areas of offshore exploration in...

Klinge Corp to serve on LogiChem Panel in Antwerp

Allan Klinge, vice-president of Klinge Corporation, will serve on a panel at LogiChem, Europe's only...

OSEA 2014: Reception for US Ambassador to Singapore

Klinge Corporation is co-sponsoring a reception for the US Ambassador to Singapore Honorable Kirk W....