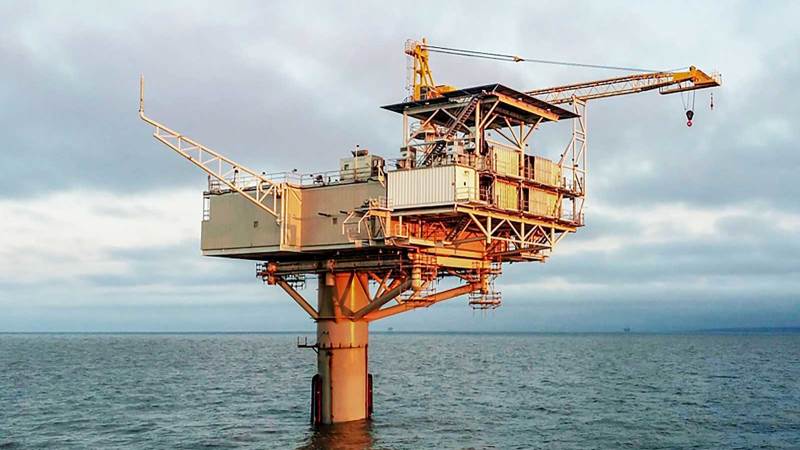 HeavyLift@Sea was assigned by Germany-based company Deutsche Oel & Gas to carry out Project Management operations for the planning and installation of the Kitchen Lights Unit (KLU) development, which was the first new offshore natural gas production platform in Alaska’s Cook Inlet since 2000.

The project involved installing a monopod platform, laying a subsea pipeline over a distance of 24 km and accomplishing the horizontal directional drilling (HDD) to connect the onshore facility to the pipeline on the seabed.

The project is now successfully completed and the gas production will begin in November.

The Kitchen Lights Unit (KLU) with its 337km2 is the biggest development region in Cook Inlet, Alaska.

Very high tidal currents up to 6k, a massive tidal range and very limited visibility below water made the Cook Inlet a very challenging environment for this offshore operation.

Furthermore, due to the hard winters in that region the time window for installation is limited to only five month during summer.

This results in a very tight time schedule for this complex project which requires perfect planning of every detail.

One of the biggest and most challenging milestones for this project was the installation of the production platform.

For this task the heavy lift ship MV ‘Svenja’ of SAL Heavy Lift GmbH was specially outfitted with living quarters and mooring winches and anchored at the well ‘KLU #3’.

The monopod was manufactured in Texas, USA and towed to Alaska by an offshore tugboat where it was lifted onto the heavy lift vessel for additional preparation work.

After the King Pile, the guiding pile, was driven into the sea bed the monopod was lifted by the two 1000t SWL ship cranes and lowered along the king pile onto the seabed.

The limited visibility due to silty water and small slack tide windows made this operation very challenging. After piles for securing the platform were driven the topsides and the helicopter deck were installed.

In the meantime the 24km subsea pipeline of diameter 25.4cm (10in) was laid starting at the well position. A pipe line barge was constructed especially for this job.

In order to move forward and lay pipe the barge had to pull itself forward in its eight point mooring spread.

Two anchor handling tug boats moved anchors in each tidal window to prevent the barge from running out of its spread.

Because of the small tidal windows the anchor handling manoeuvres had to be planned carefully to allow the barge to continuously lay pipe without exceeding the small motion limits of the pipeline suspension point. Each day up to 65 pipe line joints of length 42ft (12.8m) could be laid.

About 900m of the pipeline have to cross the shore from the sea bed to the onshore facility which is located on a cliff about 75m above the seabed.

For this so called Horizontal Directional Segment a 30.5cm (12 inch) pilot hole was drilled from the entry point on top of the cliff to the exit point on the seabed.

A 61cm (24 inch) reamer was inserted in the pilot hole to widen the hole directly followed by a 40.6m (16 inch) washover casing.

The production pipe was installed through the casing and pulled in place by a jacket platform for connection to the subsea pipeline.

In addition to the project management, HeavyLift@Sea was involved in planning the modification of MV Svenja including living quarters, energy supply and mooring winches.

Many other detail engineering solutions were worked out by HeavyLift@Sea to successfully complete this challenging project.