ORCA Offshore has cooperated with Saetech to perform a technical investigation into the Alphen aan den Rijn crane accident in 2015, at the request of the Dutch Safety Board (De onderzoeksraad voor veiligheid).

The objective of the investigation was to evaluate the feasibility of the plan and to identify the root cause of this accident.

The accident involved a twin crane lift from two barges performed on inland water. The root cause of the accident has been identified and appeared to be a lack of stability of both barges.

It also appeared that a large part of the instability was related to an unaccounted effect related to the flexibility of the cranes. This effect resulted in a critical reduction of the stability which contributed to the incident.

The next graph shows the shift of the load work point due to the flexing of the crane boom due to a barge heel which results in a stability reduction of the system. 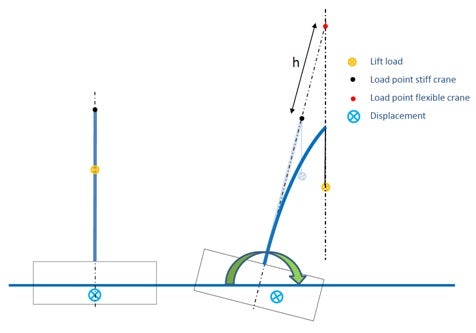 Also, a time domain analysis has been performed to simulate the effect of wind and crane actions.

MOSES from Bentley systems has been used for the simulations.