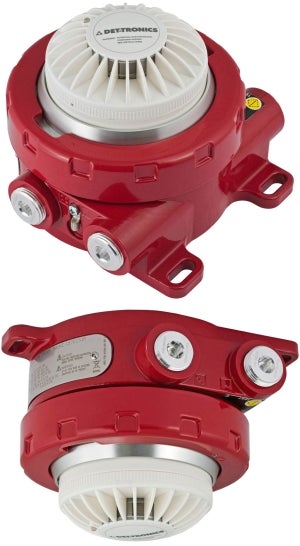 Det-Tronics announced today the release of a photoelectric, explosion-proof rated smoke detector. The Det-Tronics® SmokeWatch™ U5015 detector is a Class I Division 1, 2 and Zone 1 explosion-proof rated smoke detector that is suitable for hazardous, industrial and commercial applications. Det-Tronics, the global leader in fire and gas safety systems, is a part of UTC Climate, Controls & Security, a unit of United Technologies Corporation.

"Our commitment to safety solutions in some of the most dangerous workplaces drives Det-Tronics engineering and technological advances," said Saif Siddiqui, managing director, Det-Tronics.

"The release of the new SmokeWatch explosion-proof smoke detector will provide an innovative safety solution for hazardous and industrial work environments."

The Det-Tronics SmokeWatch smoke detector has a unique design that operates effectively in both smoldering and rapidly growing fires. The device is certified to FM 3230, the standard in smoke detection performance. The photoelectric operation and signal processing features of the detector are an enhanced smoke detection technology appropriate for either large, integrated environments or smaller installations.

"When installed with flame and gas detectors, the Det-Tronics SmokeWatch smoke detector can increase the level of safety in critical, smoke-prone environments."

In addition, the detector is certified to an IP44 ingress protection level, which makes the detector suitable for heavy industrial applications such as offshore oil rigs, wastewater treatment plants and other high-hazard environments.

The SmokeWatch U5015 smoke detector can be integrated into process control systems or a conventional fire panel through outputs that include 0-20mA, relays and a localised LED. Through its self-checking circuitry, the detector communicates its health status by conducting automatic optical and electrical fail-safe checks every one second.

"The Class I Division 1 and IP44 ingress protection certifications means that hazardous areas will now have crucial safety equipment available in places that previously did not have a choice of such high-standard devices," added Hoff.