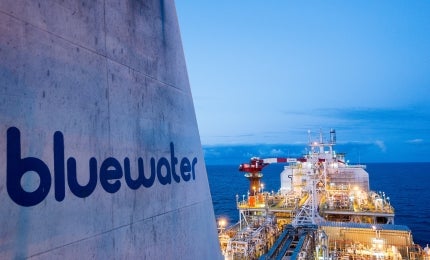 Bluewater has created, owned and operated ten floating production, storage and offloading systems (FPSOs), with three being retired and two sold back to oil companies.

The company also provides operational and logistic management and support for FPSO and FSO systems, and currently holds and operates five FPSOs.

Bluewater has developed some of the most innovative SPM solutions, including catenary anchor leg mooring (CALM) buoys and tower, internal and external turret mooring systems.

Bluewater owns and operates a fleet of FPSO vessels designed to high specification to operate in adverse environments, under the most stringent regulations.
The catenary anchor leg mooring (CALM) buoy system is a buoy permanently moored to the seabed using multiple mooring lines, facilitating near shore and offshore loading / offloading of trading tankers.
The Bluewater turret buoy rotates around a central turret fixed to the seabed. The deckhouse protects the main bearing and all equipment, offering a safe place to work.
The turret mooring system consists of a turret assembly that is integrated into a vessel and permanently fixed to the seabed with a mooring system.
Tower mooring is designed to match vessel requirements and local environmental conditions. Various factors need to be included in the design, especially the water depth and specific environmental loads.
Bluewater’s tidal energy converter (BlueTEC) is an open-architecture floating support platform suitable for tidal turbines.

Each type has its own characteristics and fields of application.

During the past 35 years, the company has created and delivered more than 100 CALM buoy systems and 25 tower and turret mooring systems, which include internal, external, fixed and disconnectable types.

The CALM buoy system is a buoy permanently moored to the seabed using multiple mooring lines. It facilitates near shore and offshore loading / offloading of trading tankers.

The buoy contains a bearing system that allows a part of it to rotate around the moored geostatic part. A tanker moored to this rotating section is able to freely weathervane around the geostatic element of the buoy.

The turret mooring system (TMS) consists of a turret assembly integrated with a vessel and fixed to the seabed by means of a mooring system. The TMS contains a bearing system that allows the vessel to rotate around the moored geostatic section of the turret.

The TMS includes a transfer system that enables connection of subsea pipelines and equipment to the weathervaning vessel such as an FSO or FSPO. The transfer system includes risers and umbilicals between subsea infrastructure and the geostatic area of the turret. Swivel modules forming part of the turret provide the transfer paths for fluids, gasses and power and control signals.

The TMS is fully passive and does not require active vessel heading control or active rotation systems.

The tower loading system consists of a tower structure that is permanently fixed to the seabed. The tower contains a bearing system that allows a segment of it to rotate around the fixed, geostatic part. A moored vessel is able to freely weathervaning around the fixed section of the base. A swivel in the tower provides the fluid, gas, power and signal transfer paths from rotating to geostatic.

A fluid transfer system enables connection of the vessel to the pipelines, which are connected at the base and swivels provide the fluid, gas, power and signal transfer paths in the tower.

Tower mooring systems are typically designed for shallow water depths and may include an ice-breaking cone structure to operate under arctic conditions. This enables the system to withstand ice on the move while being exposed to a temperature of up to -50°C.

Since its foundation in 1978, Bluewater has built a technological lead specialising in design, development, lease and operation of tanker-based production and storage systems, and is a leading provider of innovative single-point mooring systems.

Bluewater Energy Services is pleased to announce the award of a contract from Hyundai Heavy Industries (HHI) for the engineering, procurement, construction and integration (EPCI) of a major turret and mooring system for the Rosebank floating production, storage and offloading (FPSO) vessel.

The first oil production from the Peregrino phase two development is scheduled in 2022.

The Cluster 2 fields lie in the deepwater KG-DWN-98/2 Block located off the shore of the Godavari Delta on the east coast of India in water depths ranging from 300m to 3,200m.

Beryl Gas Field is located in Block SK10 off the shore of Sarawak, Malaysia, near the Helang gas field and Layang oil field, which are located within the same block.

Pasca A gas condensate field is located in the PPL 328 production lease of the Gulf of Papua, off the shore of Papua New Guinea (PNG) in 93m of water.

The Pyrenees Development lies within permit areas WA-42-L and WA-43-L in water depths ranging from 190m to 260m.

The Bonga North West field is located in the oil mining lease (OML) 118, at a depth of more than 1,000m, approximately 120km off the Nigerian coast.