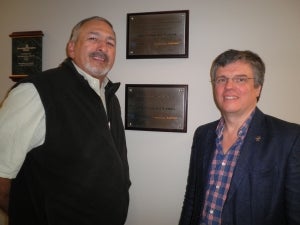 UK flowmeter specialist Litre Meter has presented another award for outstanding sales performance to its US distributor LEWA-Nikkiso America Inc.

With offices in Houston, Texas, and Holliston, Massachusetts, LEWA-Nikkiso America is a leading provider of metering solutions for the oil and gas industry.

Litre Meter CEO Charles Wemyss said: "We have a strong relationship with LEWA in the US. As expert solution providers for chemical injection in oil and gas, LEWA is well-placed in one of Litre Meter’s core markets.

"Natural synergies between the companies have allowed us to forge and sustain strong, long-standing trading relationships. The evidence of this is borne out in LEWA’S sales performance and we were delighted to present them with another award."

Bob Fletcher said: "Litre Meter’s products are high-quality and perform well in highly demanding conditions. VFF positive displacement flowmeters are ideal for chemical injection measurement and we regularly specify them in our solutions.

"Litre Meter’s VFF flowmeter is ideally suited for use in the oil and gas industry and in particular for low flow / high pressure applications.

"Years of experience in chemical injection applications onshore and offshore have confirmed the instrument’s capability to reliably measure fluids under extreme conditions of both temperature and pressure."

Positive displacement flow meters, sometimes known as PD meters, have been around for more than 100 years. They are commonly used in a wide range...