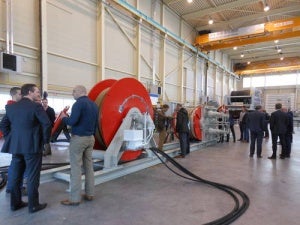 IHC Winches, part of IHC Merwede, has officially presented its 50t fibre rope traction winch, known as IDsis, to the Dutch and Belgian offshore markets. The presentation on 20 March was attended by a large group of lifting specialists, who responded enthusiastically to the prototype and the results of its initial tests.

The name IDsis is an abbreviation of IHC Deep-sea installation system, which is a dedicated deployment system for handling fibre rope, developed to overcome the restrictions of using conventional steel and synthetic wires. Steel is durable but heavy, which limits its usage in deeper water. Currently used synthetics are light, but low-heat resistance and high-creep properties limit their application on large winches. The rope is designed for critical deepwater applications, such as deep-sea installation, abandonment and recovery (A&R) and offshore mining operations.

The development of IDsis has resulted in the combination of: a traction winch, which reduces wear of the composite cable for the given load situations; and a storage winch, which is capable of reeling large amounts of fibre rope. Both are combined with an intermediate tensioner for safe and reliable operation in the offshore environment.

Following the successful completion of the factory acceptance test, the new deep-sea installation system will be tested in operational circumstances in the North Sea later this year. This will take place in association with Seaway Heavy Lifting on one of its offshore vessels.

The Dutch Maritime Innovation Programme has funded the development of the IDsis deployment system. This R&D project is executed in conjunction with such companies as Bexco, Seaway Heavy Lifting and Reden, which joined forces with IHC Winches to combine their various areas of expertise, such as winch and fibre rope technology, rope construction, operational offshore knowledge, modelling, simulation and legislation.