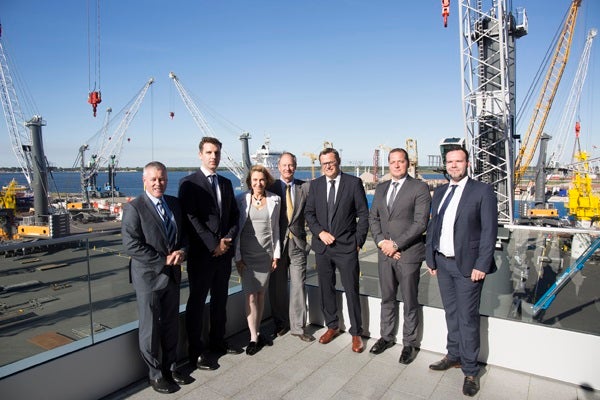 After being welcomed by Liebherr MCCtec Rostock managing director Leopold Berthold, the ambassador discussed the current situation for the maritime industry in the US market with some of the company’s sales managers. Liebherr’s maritime division has been successfully represented in the US with its entire range of products. Especially the mobile harbour cranes produced in Rostock have acquired an excellent reputation in the US in recent years and are being used in ports all over the country. In 2015, approximately 10% of the Liebherr mobile harbour cranes ordered throughout the world were sold in the US. This emphasizes the importance of the North American market for the Liebherr company. With more than 1,400 units delivered to 100 countries worldwide Liebherr mobile harbour cranes convince in all fields of application such as container handling, bulk operation and even heavy lifts up to 308 tonnes.

Thanks to the broad ship and port crane product portfolio Liebherr was also able to respond to several specific customer requirements in the US market. Liebherr, for example, realised a prestige project at the Niagara Falls in the State of New York. This special installed crane, type FCC 320R, is used to lift the visitor boats out of the water and to store them on the pier at the end of each season.

Despite the current difficult market situation in the offshore sector Liebherr managed it to deliver 24 offshore cranes with a contract value of approximately €50m in the past ten years to the US. The ship-to-shore container cranes, produced in the Liebherr factory in Killarney in Ireland, are in great demand in US American ports. This year alone, four gantry cranes were delivered to New Jersey. For the new Liebherr Reachstacker model, the LRS 545, the company also expects high potential in the US market.

The very informative conversation Liebherr representatives underlined the importance of the North American market for the company.
After very informative dialogues, Ambassador John B. Emerson and his wife Kimberly joined a factory tour through the production site of Liebherr Rostock and were really impressed: "Fascinating what Liebherr established at this young facility. These huge cranes which are produced in Rostock and supplied from here to the whole world, that’s really impressive."

Liebherr offshore’s crane division is pleased to announce the launch of its innovative new manipulator...

Liebherr subsidiary Liebherr-Argentina S.A. is pleased to announce that its new office in the Argentinian...

Liebherr's maritime manufacturing plant in Rostock, Germany has won a deal to supply a heavy-lift...