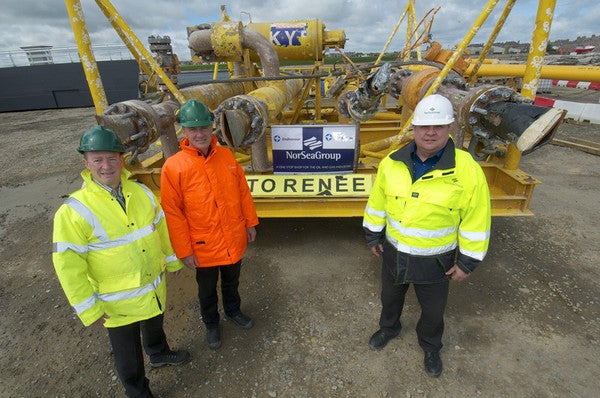 Work has already begun on the six-month project which is being carried out at NorSea Group’s Peterhead facility on behalf of Endeavour Energy and involves safe disposal of subsea manifolds and associated pipework from the Renee and Rubie fields.

All materials from the fields, which lie 200km north-east of Aberdeen, are being delivered to Smith Quay which is operated by NorSea Group. An important element of the £500,000 contract was the requirement that reuse of returned material be maximised and NorSea Group will achieve a 100% recycling rate.

The work will initially create up to six new jobs.

"This is our first decommissioning win and the first such project to be carried out in the north-east," said Walter Robertson, MD of NorSea Group (UK).

"We are primarily known as a logistics and base services company servicing the offshore industry but as part of our future growth strategy we are developing our decommissioning capability. In the current economic climate, we anticipate that many more decommissioning projects will be coming forward and we are already involved in tendering for additional contracts in this area.

"In addition to Peterhead, we have facilities at South Quay, Montrose capable of carrying out similar types of small piece decommissioning work, so we see great potential for servicing additional contracts there."

Operations director Mike Munro, who is overseeing the work, said Smith Quay and Embankment, was constructed by Peterhead Port Authority to service the DSV and subsea vessel market and is ideally located to service the northern and central North Sea.

"With 200m of quayside and a draft of 10m, Smith Quay is ideal for the landing of small piece decommissioning works and can handle structures up to 4,000t in weight. A laydown area in excess of 15,000m² and our on-site crane with a 220t capacity makes us self-sufficient in the landing of most materials and larger capacity cranes are available at short notice.

"We also carry out rigorous testing of all decommissioning materials to detect the presence of naturally occurring radioactive material (NORM) and if it is present, we work with Scotoil Services, our specialist partnership company, to carry out decontamination at our on-site SEPA approved licensed premises."

NorSea Group took on the operatorship of Smith Quay and Embankment at Peterhead on a ten-year agreement at Q3 2014. This is Phase I of a three-phase development that will see expansion onto Merchants Quay and provide 400m of deep-water quayside berthing supported by more than 50,000m² of quayside laydown area. NorSea also has a long term agreement with Scrabster Harbour Trust and a 15-year lease at South Quay in Montrose.

NorSea Group (UK) was established as the UK wing of its Norwegian parent company NorSea Group in 2013 when it opened its first office in Aberdeen. Since then there has been significant growth in the company’s business activity in the UK. In addition to establishing a presence in Aberdeen, NorSea Group acquired Danbor, the leading Danish offshore logistics company and their UK assets are now incorporated into NorSea Group (UK).

In 2014, the company also moved to new premises at NorSea Group House in Altens, providing the company with its own 4,000m² warehouse, 15,000m² concreted yard and 800m² of office space.

NorSea Group is a privately owned company founded in 1965. It is a leading supplier of base services and integrated logistics systems to the oil...