Logistics Equipment and Supply Bases for the Offshore Industry 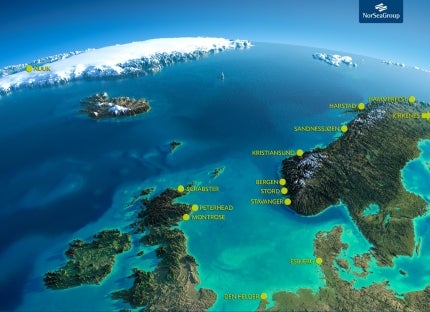 Logistics products for the oil and gas industry

NorSea Group supplies base services and integrated logistics solutions to the oil and gas industry in Norway.

With nine strategically located supply bases from Stavanger in the south to Kirkenes in the north, as well as recent expansions into the international market, the company covers the entire North Sea basin.

Every day, vast amounts of materials and equipment are transported from one of NorSea Group’s bases to offshore installations in the North Sea. The firm meets the offshore industry’s needs for storage, transport and shore facilities.

As well as terminal and shore services, the company provides the oil and gas industry with a broad range of logistics solutions and services, including supply chain management, marine and engineering services, IRM and mobilisation services and project logistics.

Bunkers, drinking water, dry and wet bulk materials are available for all quaysides.

NorSea Group’s supply bases have a high number of tenants, which comprise service providers to the offshore oil and gas industry.

On its Supplybases in Norway, the firm provides a wide range of facilities, which vary in sizes, including:

NorSea Group’s engineers have joined forces with the designers of Reach Stackers and Mobile Harbor Cranes, in order to achieve improved technical solutions and design for pipehandling.

The result is the company’s hydraulic spreader bar, which enables efficient pipehandling while removing the risk of injury to personnel in dangerous operations.

Since 1965, NorSea Group has played an important role in projects involving the construction of offshore fields and platforms throughout the North Sea. It owned and operated facilities, machinery and a skilled workforce to the offshore oil and gas development in Norway.

Since 1998, the company has widened its specialism to pipeline installations. Its experience exceeds more than 20 pipeline projects from which several subsea pipelines are the largest ever built.

NorSea Group completed the Langeled Pipeline between Norway and UK in 2005 / 2006 on a contract with Norsk Hydro. The pipeline length measured 1,166km and comprised 1.1 million tonnes of 42 and 44 CWC linepipes.

From 2009 to 2012, the company finished the Nord Stream Projects according to a contract with Eupec Pipecoatings. Running through the Baltics between Russia and Germany, the project consisted of two 1,220km of 48 CWC linepipes, which weighed 4.72 million tonnes.

In 2015, NorSea Group has undertaken a contract with Saipem to complete the Ichthys Export Pipeline between the offshore fields in Western Australia to Darwin, NT. With a total length of 889km and a weight of 1.46 million tonnes, the 40 CWC pipeline is the longest ever build in the southern hemisphere.

NorSea Group bought the Danish logistics company Danbor, which is the supplier to Mærsk Oil and the Danish Underground Consortium (DUC). The firm also has activities in Montrose and Aberdeen, UK, as well as a newly established office and warehouse facilities in the port of Den Helder, the Netherlands.

Danbor is also established in Greenland with a base joint venture, Arctic Base Supply.

With the position in Norway, the UK, Denmark and the Netherlands, NorSea Group offers a unique coverage of the entire North Sea basin.