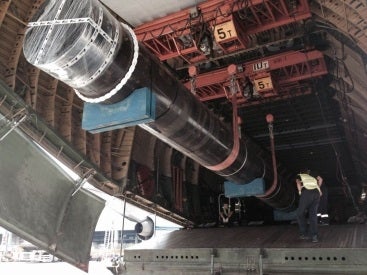 Two freighters from Volga-Dnepr Airlines’ fleet, An-124-100 and IL-76TD-90VD, were called into action to deliver more than 80t of oil and gas equipment to Cape Town in South Africa.

The An-124 flight carried five 13m pipes weighing 60t from Singapore. The pipes were shipped to Singapore’s Changi Airport by truck and then placed carefully onto airport dollies and towed to the aircraft for loading. The aircraft’s onboard cranes were used to load the pipes. The delivery was operated on behalf of logistics company UTI South Africa and was contracted under the Ruslan International An-124 joint venture.

Earlier, the urgent transportation of oil equipment from Stavanger, Norway, was organised by Volga-Dnepr’s experts onboard an IL-76TD-90VD cargo aircraft. The shipment of two subsea risers measuring 13.5m and 7.5m in length was required to complete the fast repair of a broken semi-submersible drilling rig. This equipment was delivered on behalf of French broker ATS International.

Volga-Dnepr commercial executive Clair Gunn said: "The fast delivery of the risers to Cape Town helped the oil and gas operation to resume production at the rig within a short timescale. We have a lot of expertise in meeting such urgent customer requests and in situations of extreme urgency when each day of interruption to production can result in substantial financial losses, we are always ready to provide customers with fast and effective solutions to support them in keeping their projects on track."