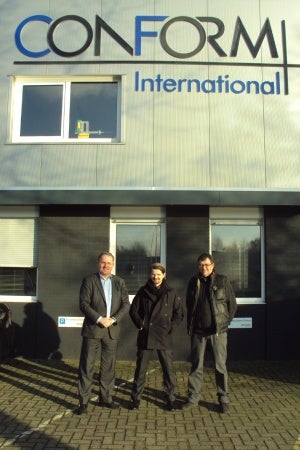 MonZon Group has formed a joint venture, MonZon Europe BV, with Mark Willems and Theo Schares. The company will initially focus solely on selling and renting scaffolding and weather protection systems in aluminum in Europe and export markets. (Excluding Sweden, Norway and Finland).

Mark Willems will be CEO of MonZon Europe BV and has much to bring to the MonZon Group, with his extensive experience in scaffolding and formwork. He will also be part of the management team, since he for many years has been employed as a sales manager and board member of one of Europe’s most successful companies, Scafom Holding in The Netherlands.

Mark has the following training and experiences:

Théo Schares has over 25 years of experience in the scaffolding sector and began working in his father’s company in 1977, which then worked mainly with wood and tube and coupler scaffold.

Théo has achieved the following milestones:

In January 2013, a stock and demo hall will be ready for delivery and demonstrations of the following product groups:

MonZon Frame® in aluminum and fiberglass

MonZon Modular Light® in aluminum and fiberglass that can be built to a height of 40m at 307cm sections with position width of 73cm in load class 3.

MonZon Modular Light Industrial™ developed in the metric measurements for the oil and gas industrial projects among others. It comes with a total new decking system from 25cm to 300 cm in aluminum which could be put in to the bay in any position. No need for any gap fillers where the ledgers today have to be covered with either a special part or with normal wooden boards.

MonZon BackPac ™ the future way of buying and using facade and construction scaffold in aluminum. Will be available in two versions; MonZon Frame® and MonZon Modular Light® with complete scaffolding material that can be built up to 120m². The MonZon Modular Light® will be delivered with brackets and aluminum planks for possible broadening of the stand from 73cm to 109 cm. Both will of course include MonZon’s new fiberglass U-Combi-deck and U-Access deck that reduce weight by up to 30% of today’s aluminum Combi-deck with associated plywood.

MonZon Protect Mobile™ aluminum and keder tarpaulin is one of the first mobile weather protection systems on the market that can run on rails by means powered by of one or more battery-powered (in the future will be charged via solar) electric motors that are easily operated by a wireless remote control of up to 100 m distance from the roof. The entire structure is built entirely of aluminum except the roofing that will be available in several different grades to meet the requirements of the rain, cold and heat. The benefits are great, with minimal costs to operate the roof opening and closing as the whole roof is propelled and wind anchored throughout the process. The roof structure can be mounted on any independent scaffold system.

Signed looks with confidence to the future by Mr Willems and Mr Schares now becomes a part of MonZon Group, where with their knowledge and networks worldwide will help to increase sales!