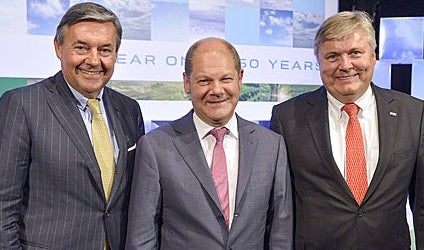 Some 650 dignitaries, customers and industry stakeholders recently joined leading ship classification society and risk and sustainability service providers DNV GL at a night to remember in Hamburg. Held at the historic Fischauktionshalle Halle, the event celebrated the 150th anniversary of the foundation of Det Norske Veritas and the first year of operation of the newly formed DNV GL Group.

The evening looked to both the past and the future of the company, celebrating both DNV GL’s long history and its continued drive to make a positive impact on the world through innovation. DNV GL Group CEO Henrik O. Madsen, reflected on this when focussing on the organisation’s ambitious new report, "A Safe and Sustainable Future".

"Our ambition has been to explore where we can leverage our history and expertise to translate our vision into impact. Through these projects we take a Broader View on society. We sincerely hope that our work can inspire and promote new and radical forms of collaboration between authorities, civil society, academia and business."

Over the course of the evening many important industry and political figures paid tribute to the sustained positive impact of the DNV GL. Olaf Scholz, the First Mayor and President of the Free and Hanseatic City of Hamburg, spoke of the positive impact of the merger, noting: "The city of Hamburg acknowledges that a major global player has been created by this successful fusion, one which is a substantial pillar in the maritime community in Hamburg. Together, DNV and GL have nearly three hundred years of operational experience and technical know-how. This means that the important tasks for the development of the technical solutions needed for the future can be tackled in Hamburg with even greater determination. All in all, the DNV GL Group in Hamburg is an important partner to the senate when it comes to developing and pursuing a holistic economic strategy for strengthening and further developing the maritime economy."

Michael Behrendt, Chairman of the Executive Board of Hapag-Lloyd AG, focussed in his speech on the qualities that enabled DNV GL to have continued success for so long: "This mixture of courage and business consideration, of a will to innovate, of corporate responsibility and collective values and convictions within the company characterise the centennial champions who have managed to be successful for over a century and a half. It is values that belong to the DNA of a centennial company like yours – values that you cannot buy for all the money in the world. But above all, values that need to be cared for." Following his speech DNV GL paid tribute to Mr Behrendt’s own long and illustrious career of success, as he was due to celebrate his retirement as Chairman the following evening.