Change in Management: Triumvirate at LEWA 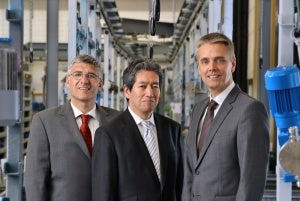 Since February 1 2013, the Pump and System Division of the Lewa-Nikkiso Group has been led by a triumvirate. The former CEO of Lewa, Bernd Stütz, left the company at the end of 2012. On 1 January, Naota Shikano took over as his successor. Shikano is now sharing responsibility for the pump and systems business of the entire group with Stefan Glasmeyer, who is responsible for sales, and with Dr. Martin Fiedler, who is head of the Operations Division.

Naota Shikano started his career in 1977 in the industrial pump business at Nikkiso, and has spent about ten of the years since then overseas, primarily in Germany, Great Britain, and the United States. As he has already been managing director of Lewa since 2011, he knows both companies to an outstanding degree.

Stefan Glasmeyer, after completing his European mechanical engineering studies in 1990 in Osnabrück and Coventry Polytechnic in Great Britain, has been employed by well-known pump manufacturers like KSB, Textron Union Pumps, Lewa and Grundfos, primarily in management positions in sales and marketing, but also in project management. He has spent ten years of that time in France. He has experience in different industries. The focus of his experience is the oil and gas industry. He is trained as a certified Six Sigma Black Belt and his last position was as director of the Industrial Division of Grundfos.

Dr. Martin Fiedler was granted his doctoral degree at Helmut Schmidt University of Hamburg in mechanical engineering, with a focus on automation technology. Over the past 20 years, he has gathered experience in different leadership positions in machine and systems engineering, with responsibilities in engineering, purchasing, and fabrication at MAN Turbo and General Electric. During this time, Fiedler has served global customers in the oil and gas industry, the process industry, and in energy production. His last position was as Global Supply Chain head at GE Gas Engines, where he was responsible for production in Austria and the United States.

The goals are integration and organic growth

In 2005, the previously family-owned company was sold to financial investors, and over the past few years has become a global player and market leader in the segment of metering and process diaphragm pumps. As a manufacturer of pumps and integrated systems, Lewa-Nikkiso plans to continue the Creating Fluid Solutions strategy, keeping the customer process in focus. The expanded top management will run the business from the strategic headquarters in Leonberg in order to push integration and increase sales together. Targeted portfolio expansions, continuous engagement in the company’s high-growth target markets, and diversification into other industries shall allow the sales mark of €500m to be achieved within the next four years.

LNG facilities are built with state-of-the-art equipment and safety controls. The industry's highest priority has always been safety and security, which is reflected in its...

Diaphragm Pumps in the Oil and Gas Industry

In the oil and gas industry you come across diaphragm pumps with a wide performance range, from exploration over processing to transportation to the consumer.