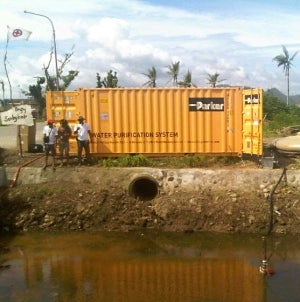 The system was successfully installed 6 January in one of the worst-hit areas near Tacloban City in Palo, Leyte Province. Parker representatives provided on-site training to local Red Cross staff who will maintain the system to accommodate ongoing water needs.

Typhoon Haiyan (Yolanda) made land-fall on 8 November 2013 as a category five "super typhoon" and displaced 4.1 million people with a death toll surpassing 6,000. Basic service restoration is still in progress with many outlying areas still without power and water.

The Parker system will serve as a primary source of water production for the Leyte Province, providing up to 20,000 gallons of safe, potable water per day from a fresh water canal. The water will be distributed regionally with water tanker trucks and approximately 40 strategically located water distribution bladders supplied by the Red Cross.

Parker filtration group president Peter Popoff said: "We are pleased to contribute to the relief efforts by providing clean, potable water to the people of the Philippines who have been devastated by the recent typhoon.

"Parker’s disaster-recovery reverse-osmosis watermakers hold great promise in delivering consistently clean water from a fully contained system that is easy to transport, install and maintain, and can use nearly any water source to produce temporary or emergency potable water wherever it is needed."

Similar water purification systems have been deployed to assist in other recovery efforts in partnership with various relief agencies. Parker deployed one of its first disaster-relief filtration systems to assist the US Army’s efforts in Biloxi, Mississippi, following Hurricane Katrina in 2005.

Obtaining the earliest indication of changes in machinery condition allows the correct actions to be taken to prevent unplanned downtime, catastrophic failure and loss of...

The revolutionary icountBS is an advanced, fully contained bottle sampling system that ensures fast, accurate and repeatable detection of contamination in hydraulic oils and hydrocarbon...

The icountOS (IOS) is an innovative solution to the challenge of measuring the quality of hydraulic oils and hydrocarbon fuels in many different applications, from...