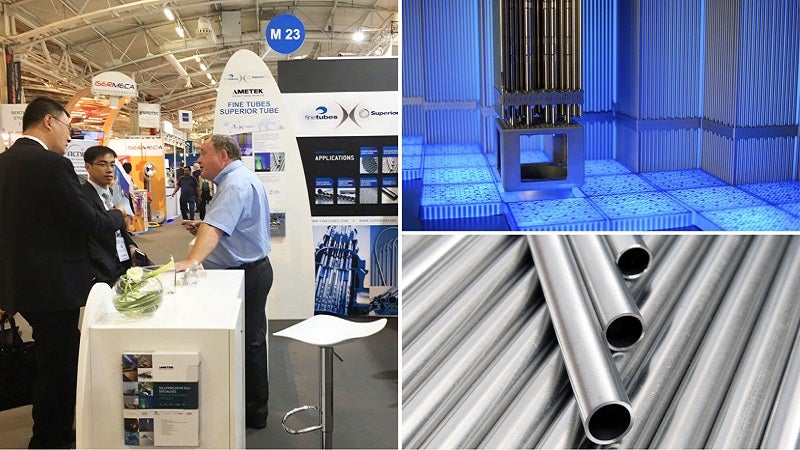 Fine Tubes and Superior Tube see a growing interest in their specialist tubing products from the nuclear industry around the world. The industry, which, since the Fukushima nuclear reactor incident, has experienced several difficult years with a number of projects being put on hold or some even cancelled, is currently seeing activity starting to increase again.

That new optimism was evident at the World Nuclear Exhibition, held 28-30 June 2016, in Paris, at which Fine Tubes and Superior Tube jointly exhibited their latest high-specification tubing range in stainless steel, titanium, zirconium and nickel alloys. Over the course of the event, the two companies held significant discussions with such major European nuclear industry players as EDF, Areva and British Energy as well as representatives from China’s fast-developing nuclear industry and a number of other operators and engineering companies involved in both new builds and maintenance.

Both companies have the facilities to develop and manufacture seamless, welded or welded & redrawn (Weldrawn®) tubes for critical components in the Primary and Turbine Nuclear Island that are vital to the safe operation and long lifecycles of nuclear reactors.

Fine Tubes and Superior Tube, both units of the Specialty Metal Products, division of AMETEK, have long been involved within the nuclear industry. For Fine Tubes, that involvement began in the 1970s, when it started to supply nuclear fuel cans to the first generation of UK gas-cooled reactors. Since then, the company has manufactured products for AGR, pressurised water, light water, heavy water and fast breeder reactors. Its tubes currently are deployed at plants in the European Union, the US, Canada, India and China.

Superior Tube established its nuclear products division in 1956 to produce nuclear-grade tubing and special fabrications used in reactors for civilian nuclear power stations and other post-war nuclear applications. Since then, the company has worked closely with the US Government on a wide range of nuclear energy projects and has participated in many government-funded development efforts in the nuclear sector.

With oil and gas extraction moving into harsher and deeper environments, the demand for high-pressure and highly corrosion resistant tubing is rising.

Fine Tubes and Superior Tube collaborate with an extensive network of representatives throughout the Middle East.