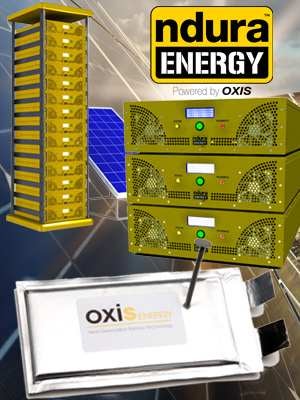 Steatite technology partner OXIS Energy has developed its largest Lithium Sulfur cell, achieving in excess of 300Wh/kg. This outperforms Lithium ion technology, which has dominated the performance battery market for many years. In addition, OXIS has achieved an increase in cell capacity to a 25Ah cell; a world-first.

This achievement is a twelvefold improvement in 18 months, which gives OXIS the confidence to predict that it will achieve a cell capacity of 33Ah by mid-2015.

Vehicle manufacturers are already reviewing and evaluating the cell technology.

OXIS is collaborating with leading European companies and universities to harness the new material developments that will enhance energy density and cyclability and will have wide-ranging benefits, such as eliminating distance anxiety in electric vehicles.

The modelling techniques being perfected allow the OXIS scientific team to predict and improve battery performance and operating conditions pertaining to a number of applications, including automotive applications.

Achieving these automotive targets is accelerating developments for additional markets, such as marine, UAV, energy storage and military applications that require ultra-lightweight battery solutions, which may lead to many spin-off projects and additional collaborations in the future.

"OXIS is on schedule to release commercial cells for use in applications in the US and Europe in 2015."

OXIS CEO Huw Hampson-Jones said: "OXIS Energy is set to remain at the forefront of the world’s leading battery technology with these significant improvement gains. They are being made in partnerships with British and European academic and research institutions, such as LEITAT of Spain, TNO of the Netherlands and the Foundation for Research and Technology in Greece. OXIS is on schedule to release commercial cells for use in applications in the US and Europe in 2015."

Steatite battery manager Paul Edwards said: "Steatite is delighted at the significant progress that OXIS Energy is making with the performance of its Lithium Sulfur cells. During our time as a strategic assembly partner for OXIS, we have seen major advancements in all aspects of this new emerging battery chemistry, which makes the future development of battery solutions very encouraging. We remain focused on designing custom battery packs for unmanned vehicle systems, energy storage devices and portable power solutions."

Steatite is delighted to announce that it has been awarded collaborative funding of £1.1m towards...

A Memorandum of Understanding (MoU) has been signed by Steatite Limited with the Taiwan Trade...

Getac will officially discontinue the B300 with 3rd Gen Intel Processor from the current product...