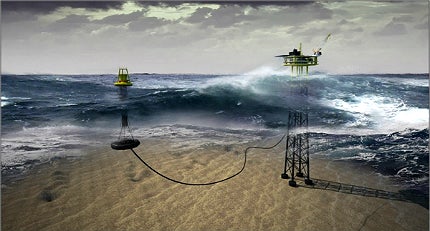 Given the relatively high cost of energy offshore – and the logistical problems in supplying it – marine energy specialist Ocean Power Technologies (Opt) is hoping its PowerBuoy system could soon be helping the O&G industry change the way it meets many of its needs.

At the heart of the company’s wave energy converter lies a vertical spar structure, which is designed to remain as upright and stationary as possible, and a circular float which fits over its upper section and is free to ride up and down the spar in response to the waves.

The float is connected to a hydraulics-free direct drive push rod, which drives the internal generators and – in the case of the APB-350 (Autonomous PowerBuoy) – feeds the on-board battery based energy storage system. This 12-metre-tall version produces a continuous average power of 350W, and as Paul Watson, OPT’s UK and Europe business development director, explains, this arrangement makes the system particularly useful for offshore applications.

"You can draw the power as and when you want, so for example, if we were using it for electric tree, you might want to actuate a valve, in which case you could have up to 7kW of power for a short period, and then drop down to a smaller, station-keeping level. You can have any profile you want; 350 watts continuous 24/7, you could have 7kW for an hour or 3kW for two hours – and so on. The generator is continuously recharging that battery."

Watson says being able to deliver 2MW in the future will represent a major milestone, but in the immediate term the focus is on applications where the technology could make a really significant cost benefit to current operations with smaller devices like the APB-350. Arguably one of the most promising of these is the ‘AUV garage’.

"In the immediate term the focus is on applications where the technology could make a really significant cost benefit."

Despite the burgeoning use of autonomous underwater vehicles (AUVs) in the offshore industry for surveying and inspection work, with an operational life of around 16 hours before recharging or changing batteries, these unmanned craft have their limitations. In addition, at anything more than sea state three, recovery becomes difficult.

The garage concept has largely developed in the defence world to mitigate such limitations, but the solution is equally applicable to the offshore industry, and could see AUVs using pre-located garages to recharge before being re-tasked remotely and then docking at another to upload the data gathered. It is something that is ideally suited to the APB-350 – and was well received by the industry when OPT presented their take on the idea at last month’s Offshore Europe, and according to Watson, the company is actively pursuing discussions to produce a demonstration prototype.

"For that type of application it has significant cost benefits, but it’s also got significant operational benefits, especially from the safety aspect. If there’s a problem on a pipeline, you haven’t got to wait for a ship to get out there, or wait for it to be below a certain sea-state to deploy one of these devices." That reduces the delay from days to a matter of hours, he says, and given appropriate funding and market interest, it could be a reality within as little as two years.

Recognising the conservatism of the industry when it comes to the adoption of new technologies, OPT is looking to a 25-year roadmap to incrementally increase capability and further diversify functionality, and establish their wave energy systems for the O&G market.

"Currently we are ready to market the APB-350 for sensing, control and communication applications. But we can see a path, over a period of years, to be able to deliver up to multimegawatt power outputs," says Watson.

"As the power output rises, the machines will not store the energy on-board, but will feed directly into the user’s assets. We’re advancing on that path already and with our Mark 3 PowerBuoy we have successfully demonstrated prototype devices that can deliver several hundreds of kilo-watts. Over the coming years, we will move to a level of performance and reliability at an increased scale that will enable further adoption by the O&G community."

At larger power outputs, perhaps the most obvious use is as a straightforward diesel replacement using the company’s Mark 3 PowerBuoy offering an easy-to-install, low-maintenance, reliable, zero-carbon alternative, which is particularly suited to today’s growing deepwater operations.

"Unmanned craft have their limitations. In addition, at anything more than sea state three, recovery becomes difficult."

From an operational point of view, this brings a number of benefits. Reducing diesel usage directly cuts operational cost, both in terms of fuel and transportation, while the increased redundancy means there is capacity in reserve to deal with either conventional generator failure or bad weather interruptions. It also means existing generator life can be increased and maintenance cycles extended.

When used for electric tree applications, it also brings significant advantages by avoiding the need for long subsea umbilical cables for power and hydraulics – thus reducing installation and recovery costs and making the equipment much more readily deployable. In addition, robust real-time communication and monitoring, which can transmit a continuous ‘health check’ to operators, improves operation, maintenance and fault rectification in the event of any incidents or failures.

All this fits in with OPT’s deliberate strategy to look at what Watson calls "non-production affecting applications" initially with the small scale APBs, to give operators the opportunity to become accustomed to the new system and experience the reliability that it brings before moving forward. "We feel that in the next several years, the larger-scale technology will be mature enough – and people will have enough confidence in it – to take it forward into production-affecting areas."

Having already demonstrated the APB-350 system with an ‘at-sea’ surveillance system developed for the US Navy, OPT is ready to take the technology’s offshore applications further – and the direction in which it develops, at least initially, depends on raising market interest from the industry itself. "We’re going to start building some business cases and then we’re going to really start trying to engage seriously with interested parties so we can put a demonstration in the ocean," says Watson. "We’re very keen to do it in Europe, especially in the North Sea, so people can see it working."

There is even a possible close fit for the application that OPT has already developed for the military to provide offshore security in less stable parts of the world, such as Africa. Equipped with HF radar atop the device, and sonar beneath, Watson explains, the APB-350 can provide a security cordon around a field – and adding motion sensors and day-and-night cameras could give significantly improved ID-at-a-distance capability and, crucially, advanced warning of potential trouble on the way.

It is clearly early days for the technology, but if all goes according to plan, it holds the promise of providing significant and sustainable benefits to offshore operators. "In a nutshell, the device is a floating clean and renewable power source, with good communications, that you can connect anything to," Watson says. "It’s not a solution, itself – it’s an enabler to produce new solutions."

Norwegian company SALT Ship Design has collaborated with ship-owner Østensjø on a new, ultra-stable accommodation craft that combines the functionality of an offshore vessel with the interior of a luxury hotel.

With New Jersey’s proposed new Port Ambrose LNG pipeline proving to be the latest project to provoke environmental controversy, and the fall-out of the Deepwater Horizon disaster still fresh in the industry’s memory, it is clear that pollution remains a big issue for both sides of the O&G divide.