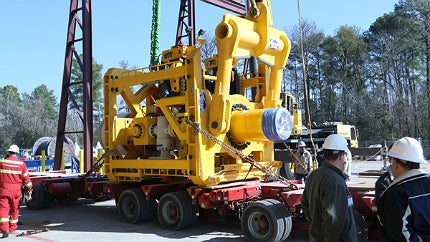 The current debate over the Port Ambrose proposal – a deepwater port located 19 miles offshore of New York – was always destined to rouse local concerns, coming so soon after Hurricane Sandy’s destructive passage along the New Jersey coastline towards the end of 2012.

When it stood off the north-eastern US coast, with its winds at the time spanning some 1,100 miles, it took the record for the largest ever Atlantic hurricane – and ultimately the second costliest in US history.

Those memories are not easily forgotten and, inevitably, many fear what the environmental outcome might be if something similar were to happen again, but this time with a potentially vulnerable pipeline added into the mix.

Although the project’s sponsors, Liberty LNG, claim the buoy-and-ship system they propose is a proven design, capable of withstanding stormy seas, or disconnecting completely if necessary to avoid any major threat, it has put hurricane-survivability firmly back under the spotlight once again.

Opening the inaugural Offshore Energy Hurricane Preparedness and Response Forum in June this year, James Watson, director of the bureau of safety and environmental enforcement (BSEE) at the US Department of Interior, pointed to the lessons to be learnt from the past.

"We must reflect on the 2005 hurricane season, one of the worst on record," he said, emphasising toppled platforms, pipelines torn from the seafloor and the ensuing protracted halt in production.

The earliest insight into the sort of extreme conditions underwater pipelines are exposed to during a hurricane transit came from the previous season – with Hurricane Ivan in 2004, when the eye of the storm crossed a network of sensors on the ocean floor, allowing the induced stresses to be measured for the first time.

Results of the Office of Naval Research funded study – published in the American Geophysical Union’s journal ‘Geophysical Research Letters’ in June 2010 – revealed that hurricanes drive huge underwater currents, strong enough to rip up the seabed as much as 300 feet below the surface.

Significantly, they also noted that the destructive currents generated remain a feature for a considerable time after the hurricane has passed; according to the study’s lead author, Hemantha Wijesekera, in the case of Ivan – a Category 4 hurricane – "the stress on the sea floor lasted nearly a week."

Physical protection is one obvious approach to protecting undersea pipelines, and as industry consultant Richard Lightman explains, while plough-and-backfill is often used to cover smaller diameter pipelines, larger ones may simply be laid on the seabed.

"Hurricanes drive huge underwater currents, strong enough to rip up the seabed as much as 300 feet below the surface."

"Given what we now know hurricanes can do to the seabed, especially where that bed is primarily weak silt, there’s always the risk that they could split – unless they’re buried, or well supported on hurricane-engineered foundations."

He says that, according to the assessment carried out in the wake of Hurricane Ivan by global risk-management company Det Norske Veritas, much of the pipeline damage that occurred took place at or near platforms, but there were some localised failures at crossings and in shallow water.

"It suggests that some design revisions might be appropriate," he says, particularly in light of the newly gained knowledge of the enormous stresses they need to withstand.

While prevention is undeniably better than cure, recent developments in containment technology mean that, in the event that an oil spill does happen as a result of the worst that the weather can throw at the offshore industry, it need not automatically end in environmental catastrophe.

In the aftermath of the Deepwater Horizon oil spill, the immediate response effectively showcased every environmental protection technology available at the time, including skimmer ships, floating booms and nearly two million US gallons of oil dispersant chemicals, as well as pragmatic approaches such as controlled burns. The longer term outcome of the Macondo well blowout, however, has given rise to what is claimed to be the largest spill containment system in the world.

Developed by the Houston-based Marine Well Containment Company (MWCC) – a non-profit organisation, originally founded in July 2010 by ExxonMobil, Chevron, ConocoPhillips and Shell – the interim containment system (ICS) can handle pressures of up to15kpsi.

"While plough-and-backfill is often used to cover smaller diameter pipelines, larger ones may simply be laid on the seabed."

The centrepiece of the system – the capping stack – is designed to be able to cap a well at depths of up to 10,000 feet and cap a well at up to 8,000 feet. Designed in collaboration with the BSEE, the system has the capacity to contain 60,000 barrels / day and 120 million cubic feet of gas per day, with the potential for expansion, and includes a 15kpsi single ram capping stack and dispersant injection capability.

The capping stack with its lifting gear stands around 30 feet tall, is 14 feet wide and weighs some 100 tonnes, providing a dual containment barrier composed of a blowout preventer ram and a containment cap. Depending on the situation, the valves can be closed to cap a well, or used to redirect the flow via flexible pipes and risers to surface vessels as required.

The system was successfully demonstrated in July 2012 at the request of the BSEE, being lowered by wire to cap a test wellhead some 6,900 feet below the surface of the Gulf of Mexico, and pressure tested to confirm its ability to control a well in real-life conditions.

MWCC are currently working to complete an enhanced containment system (ECS) that will extend the industry’s capabilities even further, and provide for cap-and-flow operations in 10,000 feet of water, with the ability to handle 100,000 barrels of fluids and 200 million cubic feet of gas per day.

The above surface design includes the use of modified Aframax tankers as capture vessels, offering 700,000 barrel storage and the capacity to process, store and offload liquids to shuttle tankers, for transfer to shore for further processing as necessary. Below the surface, the system includes a newly developed subsea containment assembly (SCA), which is to be fitted with a suite of adapters and connectors to enable it to connect with the range of interface points and well designs used by operators in the region and form an effective seal.

Unsurprisingly for a system borne out of the aftermath of a hurricane, the ECS is itself hurricane-ready, with a purpose-designed component to inject dispersant into the subsea system if the threat of an approaching storm forces capture vessels to disconnect and sail away from the area.

Ultimately, as Cynthia Quarterman, director of the pipeline and hazardous material safety administration with the US Department of Transportation, said at the Offshore Energy Hurricane Preparedness and Response Forum, pipeline infrastructure is critical infrastructure.

With a number of climate predictions suggesting that severe storms are set to get more commonplace, the need to protect offshore pipelines – and the environment – from disaster seems likely to remain a major driver on containment and protection technologies for some time to come.

The US Bureau of Safety and Environmental Enforcement (BSEE) is launching an independent institute to improve safety practices across the offshore oil and gas sector.