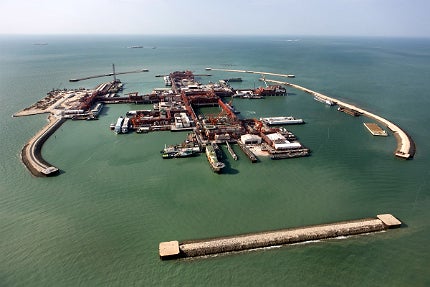 China has become the latest country to express interest and funding to Kazakhstan for a stake in the Kashagan oil project. The agreement will involve Kazakhstan selling 8.33% of the oil field to the China National Petroleum Corp (CNPC) for about $5bn.

The recent establishment of 20 production wells comes eight years after it was originally scheduled. This launch of these oil wells came about due to an October 2013 deadline, which was introduced in the Consortium‘s production sharing agreement (PSA). If this target was not met, the consortium would have had to give up its compensation for the costs they incurred.

This consortium, which was originally led by BP, has invested almost $50bn into the project so that it can handle the technical and geographical issues involved, making Kashagan the world’s most expensive oil project.

"China has become the latest country to express interest and funding to Kazakhstan for a stake in the Kashagan oil project."

During the second part of the 20th century, interest in oil production in the Caspian Sea area decreased as a result of slow economic growth and increased attention towards other oil-rich locations. However, the region reclaimed its status after a consortium of international oil companies, which included BP, Eni, Shell, Total and ExxonMobil, signed a deal with Azerbaijan to advance the country’s offshore reserves.

As a result of this association, the Azeri-Chirag-Guneshli (ACG) field was discovered and the Caspian region has experienced a greater level of investment in major projects, such as Kashagan.

As of 2012, the known oil reserves in this region, according to the US Energy Information Administration (EIA), are estimated to be around 48 billion barrels, while there are approximately 292 trillion cubic feet (Tcf) of natural gas.

The NCOC further revealed that in 2012, oil production from Kashagan was estimated to be about 1.6 million barrels per day, while there are also plans to extract around 1.9 million by 2015 and 2.6 million by 2020.

The US Geological Survey (USGS) has estimated that around 20 billion barrels of oil and 243 Tcf of natural gas may exist in the region. Much of it is believed to be in the South Caspian Basin, which has remained unexplored because of territorial disputes concerning offshore waters.

With Kashagan being looked at as the latest hotspot for hydrocarbon production, Caspian region countries such as Azerbaijan and Kazakhstan, have received large amounts of foreign investment towards their oil and natural gas sectors. With the additional investment and application of Western technology, exports of oil and natural gas from the Caspian area have grown rapidly.

The Caspian region, NCOC external communications manager Hans Wenck revealed, presents "safety, engineering, logistics and environmental challenges" which makes it "one of the largest and most complex industrial projects currently being developed anywhere in the world."

"US Geological Survey (USGS) has estimated that around 20 billion barrels of oil and 243 Tcf of natural gas may exist in the region."

He says a "reservoir is located some 4,200 metres below the seabed and is highly pressured. The crude oil that it contains has high ‘sour gas’ content (15% of hydrogen sulphide (H2S); four percent carbon dioxide (CO2)."

Wenck emphasises that even though "exploration of high pressure, high sour gas reservoirs is not new, when compared to other sour gas fields around the world, Kashagan can be considered to be pushing industry frontiers – particularly when considering the harsh operating environment of the northern part of the Caspian Sea."

The region’s environment, Wenck explains, is a very delicate area with "abundant and diverse fauna and flora, including a number of endemic species." Sturgeons are considered the most valuable commercial species, along with seals and birds that inhabit the coastal wetlands.

He further describes that the "northern part of the Caspian Sea is a difficult location to supply essential project equipment. Logistical challenges are amplified by limited access to waterways, such as the Volga-Don Canal and Baltic Sea-Volga waterways, which are only navigable for around six months of the year due to thick winter ice" because temperatures can fall to less than -30°C.

In addition, the North Caspian becomes frozen territory for nearly five months of the year, which leads to "ice drifts and ice scouring place heavy constraints on construction and production activities, and call for novel technical solutions."

Transport issues in the Caspian region

The Caspian Sea is the largest enclosed body of water in the world. Wenck explains that the shallow northern part, where the Consortium operates, covers a quarter of its total surface but accounts for only around half percent of its total volume.

While the maximum depth in the southern part of the Caspian Sea is 1,025m, it is only three to six metres deep near the Kashagan field.

Another reason why transporting oil is an issue in the region, Wenck reveals, is because the logistics "are insufficiently developed; gas exports would be difficult because of missing gas pipelines; LNG export wouldn’t work because there is no port for LNG tankers." Pipelines are an option, but there is an issue involving capacity availability.

Kashagan – rewards may outweigh the risks

While there are difficulties involved in Caspian Sea oil drilling, Wenck emphasises that Kashagan presents vast "opportunities in developing one of the biggest fields world-wide; more than 35 billion barrels in place of which a third is recoverable."

The EIA estimates that the Caspian area produced an average of 2.6 million barrels per day of crude oil in 2012, which amounted to about 3.4% of the global supply, with just over a third of that being extracted from offshore fields.

"The EIA estimates that the Caspian area produced an average of 2.6 million barrels per day of crude oil in 2012."

It also produced about 2.8 Tcf of natural gas in 2012. This amount of gas reserves reveals there may me be a greater possibility of future growth in production.

However, not enough exploration is taking place in the region. Because of the various challenges linked with Kashagan, the development costs are greater when compared to other oil production projects in the world.

The fact is that oil and gas prospects around the world are competing for funding and as a result cheaper projects that offer a more lucrative return on investment have a competitive advantage.

Eni has predicted that output from the initial development is set to reach 200,000 barrels per day (bbl/d) by the end of 2013 and then increase to 370,000 bbl/d in 2014. In addition to China’s current funding agreement with Kashagan, the CNPC has also agreed to pay about $3bn to fund part of Kashagan’s second stage development plans, which is scheduled to occur after 2020.

The EIA deduces that the ability for the Caspian region countries to export increased levels of their oil and natural gas will be determined by how fast the demand for it increases.

Unfortunately, the main issue this region is facing concerns how quickly they can build additional export infrastructures, and whether these costly projects aimed at cultivating Caspian resources can draw further investment for their endeavours.

The cold war: how sea ice impacts on Arctic operations

Ice floes forced Shell to stop drilling operations in the Arctic and the threat is set to escalate as summer sea ice disappears at an accelerated rate.