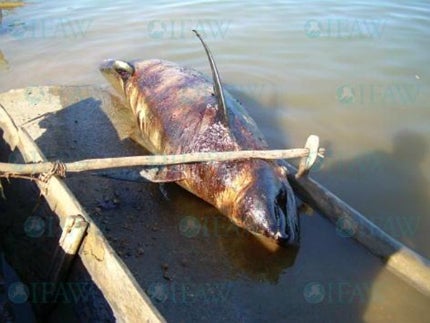 After a spate of unexplained whale deaths in areas where seismic testing by the offshore oil and gas sector had recently occurred, we published the article ‘Could oil and gas exploration be harming whale populations?‘

Responding directly to the article, via our NRI Energy Technology group on LinkedIn, Patrick McGinn, public affairs at ExxonMobil, had this to say:

Seismic airguns were clearly not involved in this incident and the research panel clearly pointed that out in its report. Oceana mislead everybody about airguns for more than 24 hours and dominated the first news cycle with their false story that was carried by hundreds of news and social media outlets — despite my pointing out their obvious error in the first 30 minutes.

They claim to have issued a retraction about airguns and in doing so continue to mislead people about the sonar system called MBES — which does not use an airgun or anything like an airgun. They deliberately continue to confuse people on this issue. The science panel that issued the report later issued a statement clarifying the misrepresentations made by Oceana and other NGOs.

We appreciate the ISRP’s clarification of inaccurate media reports about the cause of the 2008 whale stranding in Madagascar. While the clarification of media reports is helpful, ExxonMobil maintains its original position that the finding about the MBES is unjustified due to the lack of certainty of information and observations recorded during the response efforts in 2008.

The panel disregarded a key study of satellite imagery showing whales stranded on a nearby beach as early as May 20, 2008 – nine days before the ExxonMobil contracted vessel arrived in the area. The panel decided that these images were of boats, contrary to the opinion of satellite imagery experts that they were biological. The presence of the whales on May 20 correlates with oceanographic conditions that existed during other known strandings, and suggest such conditions as a plausible cause.

For instance, the only other mass stranding of melon headed whales in Northern Madagascar occurred over a period of 10 to 17 days starting November 20, 2007. There was no MBES or seismic testing anywhere near that area. Weather hind-casting for November 2007 and May 2008 shows the same sort of change from upwelling to downwelling as has been associated with strandings of similar whales offshore Florida in similar shoreline configurations.

The panel also disregarded a technical report about detailed modeling of sound from the MBES showing that the sound would be at background levels well before the whales reached the entrance to the Loza lagoon.

Multibeam echo sounders have been widely used by governments, industry and research organizations to map the ocean floor around the world for several decades.

Although potential harmful impacts, if any, on cetaceans are not proven, ExxonMobil understands that multibeam echo sounder operations may carry some level of risk to some marine mammals, and we have incorporated this possibility into our risk assessment process.

Since 2008, ExxonMobil has developed a detailed risk assessment process using numerical modeling of underwater sound and knowledge of local marine species. The models take into consideration the characteristics of the sound sources, the physical configuration of the sea floor and the temperature profile of the water column to predict the level of sound in the water around the survey vessel. Analysis of the sound levels is used to identify potential risks and recommend appropriate mitigations.

Could oil and gas exploration be harming whale populations?

After a spate of unexplained whale deaths in areas where seismic testing by the offshore oil and gas sector has recently occurred, many are concerned the industry could somehow be responsible for causing the unnatural death of whales.