Responding directly to the article via our NRI Energy Technology LinkedIn group, Patrick McGinn, Public Affairs at ExxonMobil, had this to say. 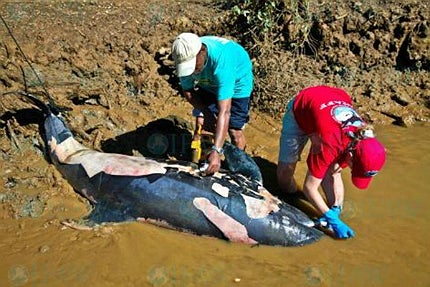 In the first week of September 2013 a whale washed up on the coast of Nkontompo, near Sekondi in Ghana. According to Ghanaian environmental campaign group Friends of the Nation, it was the fifth whale that had washed up in the region in a week.

This being a rare occurrence – the region usually finds around one whale every five years – people gathered in awe to marvel at the stranded water creature, before being forced to dig a humongous hole and bury the beast in the sand.

According to the group the frequency of stranded dead whales within the last four years is worrying: since 2009 about 16 whales have washed up ashore.

Much to the local community’s concern, there is no official explanation as to why Ghana is experiencing this escalation in deceased whales washing up on its shores. However, many have come to their own conclusions, which have led them to the offshore oil and gas industry.

Oil and gas industry in Ghana

"Tthe frequency of stranded dead whales within the last four years is worrying: since 2009 about 16 whales have washed up."

The oil and gas industry came to Ghana in the late 2000s – there had been some previous limited exploration before this, but it became intensive in 2009 – when seismic exploration in the area began to properly take off.

It was discovered Ghana had light crude oil in commercial quantities, around 660 million barrels, ranking 45th in the world in 2012. UK-based Tullow Oil and its partners started commercial production in the area in 2010.

Tullow Oil was asked for comment in regards to the recent spate of whale deaths in Ghana for this article but declined.

Ghana’s Environmental Protection Agency , however, has said it is groundless to say that most dead whales and other marine species were found near oil rigs, adding that they do not believe it is clear what caused the whale deaths.

Friends of the Nation have called for an official investigation into the deaths because local fishermen are concerned that whatever killed the whales may contaminate the fish.

Although there is no official link from oil and gas industry to increased whale deaths, Matthew Huelsenbeck, a marine scientist from Oceana , an international organisation focused solely on ocean conservation, says an oil and gas exploration technique known as air gun blasting, whereby a series of blasts are let out every ten seconds for a period of days or weeks at a time, can be extremely damaging for whales.

"For marine mammals that have highly sensitive hearing, seismic testing is like being in a war zone," he says.

This can lead to temporary or permanent loss of hearing, abandonment of habitat or force the whales to move into shallow water, where they get stranded and die.

Huelsenbeck says a new report recently released by the International Whaling Commission details an incident in Madagascar, where 75 melon-headed whales died in 2008 after ExxonMobil used a sonar mapping tool, an intense version of a Multi-Beam Echo-Sounder (MBES), which was used with other seismic technologies to search for offshore oil and gas. The scared whales moved into a shallow lagoon, where they died of exposure.

"This study is one of the first to show that disturbing marine mammals with sound can have fatal consequences," says Huelsenbeck.

Out of sight, out of mind

Although it’s unclear whether the whale deaths in Ghana are related to the offshore oil industry – Huelsenbeck does note it looks to have occurred after seismic testing "so there is possibly a connection" – it is far from an isolated incident. So why is the issue rarely talked about?

"Friends of the Nation have called for an official investigation into the deaths because local fishermen are concerned."

Huelsenbeck says the issue is largely "out of site out of mind" and regulators need to hear more frequently from concerned individuals for it to be taken more seriously.

Another solution would be for the industry to develop quieter seismic technologies.

Whale populations are struggling due to constant threats such as whaling, shipping activity and climate change, so if the offshore oil and gas industry provides another threat then the issue should be explored more.

"Recent events like the one in Madagascar are an indicator that seismic testing can be deadly for marine mammals."

ExxonMobil’s Patrick McGinn shares the company’s version of events, stating unequivocally that airguns were not used and that misrepresentations by NGO’s are at fault for casting doubt over a tried and tested technology.