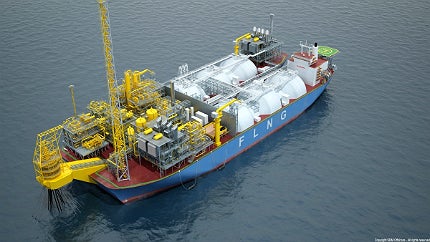 The environmental and economic advantages of offshore liquefied natural gas (LNG) production have given the nascent floating LNG (FLNG) market a firm foothold in the oil and gas sector. The ability to process natural gas on-site at an offshore gas field sidesteps the need for onshore infrastructure and extensive subsea pipelines, with the associated financial benefits and reduced environmental footprint making an enticing proposition for operators willing to invest in new technology.

On the other side of the coin, however, lie the host of technical challenges inherent to developing a floating liquefaction plant that needs to carry out the functions of a traditional onshore LNG plant in around a quarter of the space. On top of the space constraints are the perils of wave motion and offshore weather conditions, making safe operations a potentially tricky process.

As a result of these issues, the first wave of FLNG projects currently in development, such as Shell’s Prelude FLNG off Australia’s north-west coast and Petronas’s PFLNG 1 project in Malaysian waters, are located in offshore locations that present few environmental challenges, with mild weather and relatively tranquil sea states.

As the market picks up and developers look to unlock previously unviable resources, FLNG operators will have to start pushing further offshore to deepwater locations prone to altogether harsher conditions.

In these waters, current systems planned for offloading LNG from the floating plant to gas carriers could prove insufficient.

Chris Lo: Could you describe the technologies planned for current FLNG locations, and their possible disadvantages in the future?

"You need to convince the customer that your technology is proven enough to be used offshore."

Vincent Lagarrigue: The current FLNG projects will be located in mild environments, meaning the sea states are pretty low, so the operators are able to operate in side-by-side configurations with loading arms or with aerial composite hoses.

In terms of issues in the future, this is another story. Trelleborg believes that in the future the operators will have to go further offshore to collect the gas and liquefy it. In that sense, the sea conditions will be harsher, and those technologies will not be used anymore as the FLNG [plant] and the carriers will be too close, and for safety reasons the best solution will be to operate in tandem configuration, enabling a longer distance between the vessels.

In those conditions, a tandem offloading system will be required, and this is exactly what Trelleborg has been working on since 2008-09.

CL: What are the advantages of the tandem offloading system?

"The qualification is expected to be completed in the middle of next year."

It will also bring reliability, as the system is supposed to operate in harsh environments with [wave heights] up to four to 4.5 metres.

The system will bring additional operability conditions; there will be less downtime because of the increased window of the operation.

CL: What are the advantages that attracted you to SBM Offshore’s COOL hose technology, and how do you plan to integrate this technology into your Cryoline hose system?

"The system will bring additional operability conditions; there will be less downtime."

So last year when SBM decided to focus on their core business, which is FPSO [floating production, storage and offloading], we heard that they were intending to sell their COOL hose technology, so we decided to buy this technology.

The main reason is that it enables us to strengthen our position and speed up our path to the FLNG market. It was also a question of adding additional know-how, as SBM has huge expertise – they had been working on that since 2006, so they could also provide us with expertise on this subject.

CL: What work have you been doing to test and certify your tandem offloading system in realistic offshore conditions?

VL: We are qualifying our 20in cryogenic hose, and we have been working for some months on that. The qualification is expected to be completed in the middle of next year. So what is the qualification process? It consists of manufacturing different prototypes and testing them in different configurations, in ambient temperature and cryogenic conditions, with static and dynamic conditions as well.

All those tests are described by the standard EN 1474-2, which is the reference right now on the LNG market for these types of products.

CL: There are very few qualified systems for offshore LNG offloading using cryogenic hose systems – why do you think this gap in the market exists? Is it too early for many companies to start investing in this technology?

VL: What you mentioned is 100% right. There are only two FLNG projects ongoing right now in Australia. More are coming, but so far the operators have chosen places quite close to the seashore in mild environments, as I mentioned before. Developing this kind of technology is also quite cost-intensive, and it requires some time to develop such a hose for the market.

The oil and gas industry is quite conservative, so you need to bring confidence to your customer that your product is reliable and is in line with safety expectations and ready to be used offshore. Operators cannot afford to have too much downtime because of system failure or shutdown. You need to convince the customer, and it takes time, that your technology is proven enough to be used offshore.

CL: Do you think the greater availability of flexible LNG offloading systems will provide a boost for the wider FLNG market, by allowing operations in harsher offshore locations?

VL: This is typically what we are expecting, or what we were expecting back in 2009 when we started to work on this. We were really confident that the FLNG market will increase a lot and go further offshore, to collect gas in different places around the world, and therefore the need for the system we are developing with Saipem will be mandatory to be able to collect the gas in proper conditions.

It’s always difficult to make forecasts, but if you rely on market analyses, the forecasts are really good, and CAPEX will increase a lot in the next ten years. So we are pretty confident that the FLNG market will grow, and it will be a major market for us as well.

CL: What is the timeline for bringing the system to the market?

VL: We expect to qualify the hose in mid-2014, meaning the system will be ready to be launched after that, so late 2014. If we consider the offloading system for LNG, we have been in contact so far with many operators, many customers, but not 100% involved in FEED [front end engineering design] studies so far.

We are trying to lobby the operators and our customers to use the tandem FLNG hoses. We have regular discussions with many different customers, and we are trying to convince them that the time has come to use this type of technology.

The US Bureau of Safety and Environmental Enforcement (BSEE) is launching an independent institute to improve safety practices across the offshore oil and gas sector.

The Caspian Sea region has recently become a new point of interest for oil and natural gas production.