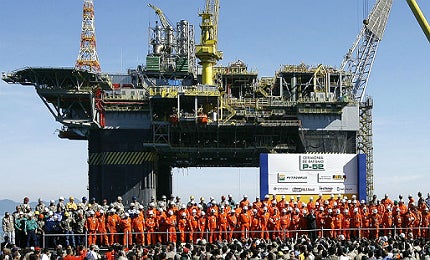 With the initial 172 areas announced on 10th January swiftly bolstered a fortnight later, after a request from President Dilma Rousseff for a further 117 to stimulate regional oil exploration, 14th and 15th May will see concessions awarded which could net the Brazilian Government up to BRL 10bn ($4.9bn).

An additional auction for rights in the huge subsalt region, offshore of south-eastern Brazil, is also set to follow at the end of November, the first under a new production-sharing framework. And finally, in mid-December, comes the first special auction for on-shore oil and natural gas rights.

As one of the companies which has participated in most of the upstream bid rounds since 1998, acquiring exploration blocks and making significant investments in the country, Shell‘s reaction to the news seems fairly typical.

"We are pleased with the recent government announcement that bid rounds will restart in Brazil in 2013," says Shell Brasil Petróleo’s Igor Baiense. "We will look carefully at all opportunities to grow our portfolio in the country."

Taken together, this all represents a much needed shot in the arm for the industry – and the Brazilian economy too – but it is the country’s return to selling offshore licences which will arguably prove the single most important aspect.

Years of stalled promises and postponed auctions following the discovery of the vast offshore Lula field in 2007, coupled with ongoing disagreement over the division of royalties, had forced many of the majors to reduce exploration activities and reassess their view on long-term commitments to the region.

"Taken together, this all represents a much needed shot in the arm for the industry – and the Brazilian economy too."

Until the first hint of this forthcoming round, back in September 2012, things had not been looking good, with oil companies warning that without the sale of new concessions, exploration could effectively halt as soon as 2015.

Even after that initial announcement, with the issue of royalty allocation remaining un-resolved, some still questioned whether the auctions would go ahead.

However, any lingering doubts on that score were allayed in November, when the new law to distribute oil revenues more widely within the country – which had been the sticking point – was finally passed, ensuring that, in the words of energy minister, Edison Lobão, "royalties are no longer an issue."

Shell is, clearly, not the only one looking forward to May’s offering; the other oil majors are also eyeing the new opportunity – and that raises the potential prospect of some big bids. Private sector equity might be looking to make its mark too.

"Small companies suffer particularly badly when new options aren’t forthcoming, especially in what you might call the ‘new frontier’ areas like this," says industry consultant, Richard Lightman. "There are risks, especially for start-ups, but the whole equatorial region is seen as a definite hot spot right now, so there’ll be plenty of interest from the smaller players – if they can get the investment."

"Shell is, clearly, not the only one looking forward to May’s offering; the other oil majors are also eyeing the new opportunity."

Nevertheless, Lightman says that despite a general expectation that there would be a deliberate attempt to encourage small independent participation in the round, it seems that any such intentions have largely been sidelined – and that, he suggests, could have serious implications for the future.

Unsurprisingly then, like a number of other commentators, Lightman expects the majors to mop up most of the impending 60,000 square miles on offer.

Agência Nacional do Petróleo (ANP), Brazil’s regulator, published the preliminary tender protocol and draft contract and on 24th of January, public consultation closed on 4th February, ahead of the final, definitive bidding notice and concession contract, scheduled to be released on 11th March.

The drafts have broadly maintained much of the same general form as before. To pre-qualify, the parent company must demonstrate adequate financial and technical capability, and successful bidders will gain concession periods of up to 35 years – five to eight years in the exploration phase (those over five years requiring ‘A’ or ‘B’ operators) and 27 years of development and production. However, there have been some important changes since the last licensing round, five years ago.

One of the most significant is the new minimum net equity requirements. For non-operators and ‘C’ operators, the bar is now set at BRL 1.9m and BRL 3.8m respectively, while the requirement for ‘B’ operators has risen to BRL 59m – nearly three times the previous amount – and ‘A’ operators will need BRL 107m.

Financial qualification criteria were, though, otherwise simplified by the adoption of a standardised declaration form, and although the scoring condition for the different operator categories were revised – now including scores for previous exploration investments and experience in environmentally sensitive areas – the minimum scores themselves remain unchanged.

Pre-qualified companies can also bid in consortia, providing that all the members are themselves pre-qualified in their own right, at least one of them holds a minimum 30% stake, and all other members each have at least a five percent interest. Successful foreign bidders must use a fully Brazilian-based subsidiary to hold their concessions, with the ultimate parent company being required to act as guarantor for its licence obligations – including liability to Brazilian taxes, royalty payments and any production levies.

January’s announcement has been widely welcomed, both by the industry, so long starved of new exploration opportunities in Brazil, and by many of the region’s economists. In recent years the country’s dynamic economy has somewhat de-railed, slumping from annual average growth of 7.5% in 2010 to just 1.5% in 2012, as a combination of fiscal, monetary and other chronic national problems came to a head.

That could all change if these new licensing opportunities bring the investment surge that many predict, and ultimately help drive the birth of a more diverse oil industry in Brazil – one that encompasses the full potential of the frontiers and new discoveries, mature basins and unconventional reserves.

As Shell’s Baiense puts it: "Bid rounds are good for the oil and gas industry, development, government income, jobs and sustained growth."

The qualification period runs until 26th March, and thus far, all indications are that the renewed international attention and market’s high expectations will be translated into some very serious numbers, come the middle of May.

As Shell continues to develop its subsea compressor technology for its Ormen Lange deepwater project in the Norwegian Sea, the vision of an entirely rig-less project could soon become reality. But could this project really mean the end of oil rigs as we know them?

Oil giant Shell recently won four out of five cases brought against it in court by Nigerian farmers seeking reparations for lost income due to pollution in the Niger Delta. While the verdict may have given Shell legal vindication, critics still question the company’s moral integrity in Nigeria.