Electric mobility is a crucial element of the successful energy transition. Electric vehicles (EVs) are expected to account for over one-third of the new car sales worldwide by 2031, and so oil and gas companies are reacting with heavy investments across the EV value chain. Such investments are being made in a bid to remain relevant within this exciting segment.  GlobalData’s free report, Oil & Gas Sector Strategies in Electric Vehicles, reveals that transportation accounts for almost half of the petroleum products demand. However, the wider adoption of electric vehicles could slow the pace of petroleum products demand in the future.   Our report includes:   Use this report to help navigate a new frontier for the oil & gas industry.
By GlobalData 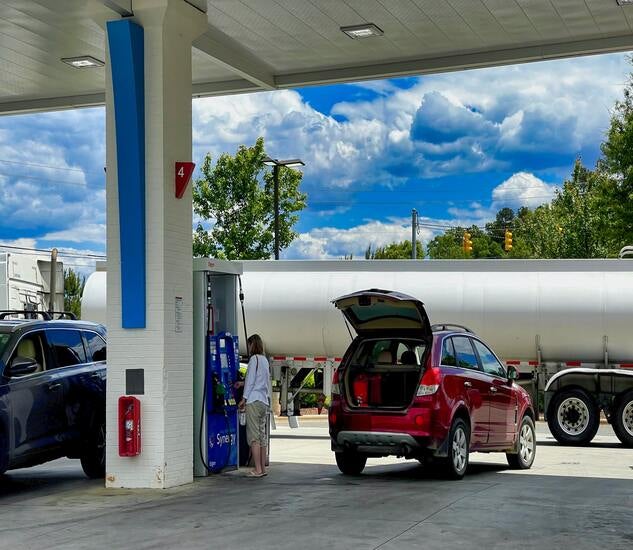 Thank you. Please check your email to download the Report.

"The time for experimentation, for marginal changes and for conditional response is now over," Christiana Figueres told the International Petroleum Industry Environmental Conservation Association (IPIECA) in April.

The international global warming debate is more pertinent than ever and the fossil fuel industry is right at the heart of the debate.

According to an IPCC report released earlier this year, CO2 emissions from fossil fuel combustion and industrial processes contributed about 78% of the total greenhouse gas (GHG) emissions increase from 1970 to 2010; a similar percentage to the period 2000 – 2010. Fossil fuel-related CO2 emissions, which were curbed only slightly by the 2008 financial crisis, have been growing at a rate of 2 – 3% per year.

Scientists warn that decisive action is needed if the world is to reach the internationally agreed 2°C target for global warming over the pre-industrial average.

According to the IPCC, in the majority of scenarios where global warming targets are met, 80% of electricity supply has to be provided by low carbon sources such as renewables or nuclear by 2050. Fossil fuel generation without carbon capture and storage (CCS) will have to be phased out entirely.

The European Commission has set climate change targets to be met by 2020, the most notable of which is a 20% reduction in EU greenhouse gas emissions from 1990 levels. Its key mechanism is the European Union Emissions Trading System (EU ETS) where emissions are traded, bought or provided to large energy users such as offshore oil and gas companies.

ExxonMobil, which was the first major oil company to publish a report on how it was managing climate risk, states that: "The ‘low carbon’ scenario would require CO2 prices significantly above current price levels."

The company believes prices would have to rise to above $200 per tonne, whereas current EU Emissions Trading System prices are approximately $8 to $10 per ton of CO2. Although from 2021 the rules are expected to change with the introduction of a higher price track to be followed. Across the Atlantic, the US only has a carbon price in some states, most notably California.

Osbaldstone says the current low carbon price "is good from a business-as-usual point of view as it keeps costs down."

The UK government in this year’s budget announced it would freeze the carbon price floor to around £18 to ensure investor confidence in low carbon technology from 2016-17 through to 2019-20 to try and limit the additional cost burden placed on UK emitters.

"It’s doubtful whether the UK’s carbon price floor has really succeeded in supporting low-carbon investment because it’s administered as a piece of energy taxation and therefore prone to adjustment and intervention over time", says Osbaldstone

The cumulative affect of a low carbon price teamed with shrinking support for renewable schemes and a value-for-money approach to energy provides little incentive for oil and gas companies to invest in CCS storage for both its refineries and offshore operations.

"It’s doubtful whether the UK’s carbon price floor has really succeeded in supporting low-carbon investment because it’s administered as a piece of energy taxation and therefore prone to adjustment and intervention over time."

As such, it is no surprise the industry’s future outlook is vastly different from the IPCC’s, and thus missing the report’s urgency. ExxonMobil in its report stated it didn’t expect any of its assets to become "stranded" because of a "low carbon scenario". It sees producing its assets as essential to meet growing energy needs.

A spokesperson from industry body Oil & Gas UK concurred, saying: "All forecasts show that oil and gas are likely to provide some 75% of the world’s energy requirements in 2035."

These outlooks are backed by growing energy demand around the world – Exxon Mobil predicts the world will require 35% more energy in 2040 than it did in 2010.

Osbaldstone says CCS is an essential technology for fossil fuels to remain a part of the global energy market by the end of the century. But to develop it, the industry needs more incentive and support.

"CCS is not a proven technology at the moment. It needs demonstrating [and] it would need public money to do it," says Jim Skea, Research Councils UK energy strategy fellow and professor of sustainable energy at the Centre for Environmental Policy at Imperial College London.

"No company has the capacity to put all R&D money into CCS by itself."

Currently, the UK has two CCS projects underway – one at a combined cycle gas turbine (CCGT) station in Peterhead and another called the White Rose CCS project, which plans to develop a new clean coal power plant in Yorkshire with full CCS technology.

Funding for the next stage of the Peterhead project was announced in February 2014. According to the government, the project will investigate capturing more than 85% of CO2 emissions that would otherwise be emitted to the air; this CO2 will then be transported by pipeline to the Goldeneye platform in the North Sea for storage in a depleted gas reservoir about 2.5km below the sea bed. The government is investing around £100m in both projects. The projects have however been so slow moving that in May MPs urged the government to prioritise spending on them.

Older than the constitution of Norway itself, technology company Kongsberg Gruppen is celebrating its 200th anniversary.

Skea suggests the government not only needs to put capital into such projects but to also provide revenue support "so people get revenue for the carbon they capture through the actual projects."

He also suggests that if supplied to an electricity storage station CCS would be covered by the new UK electricity reforms’ feed-in tariffs, which means electricity from such a plant would get more than the market price: "These feed-in tariffs would be much, much more significant than the carbon price but the [carbon price] is so low it is not going to make a material difference," says Skea. "It needs to be £50-£60 a ton to start thinking about CCS."

On the other hand, Skea says companies operating in Norway are incentivised to invest in CCS and other such technologies because of a high tax burden, as demonstrated by Statoil, which has five different CCS projects on the go.

There is also an ongoing debate over whether CCS will have the long-term effect it is expected to have. University of Southampton National Oceanography Centre professor Dr Simon Boxall, when asked if CCS is the answer to the fossil fuel industry’s climate change problems, says: "No. I think it helps but in the long term it is a bit of a sop. We need to do it as we can’t stop use of fossil fuels immediately – but it shouldn’t be a band aid that stays on indefinitely."

Enhanced oil recovery (EOR) is one incentive for companies to invest in CCS. Operators in the Arabian/Persian Gulf are investing in EOR using CO2 captured from oil refineries. A project in Canada is also using carbon dioxide produced by the Dakota Gasification Company’s coal gasification facility, which is then pumped into Cenovus Energy’s Weyburn oilfield and Apache Canada’s Midale oilfield in southern Saskatchewan.

For the UK North Sea, which is gradually ramping down production, Skea says experts have told him that to use EOR, companies would have to act quickly as once the majors pull out of the declining area it is unlikely smaller companies would be able to invest in such technology.

EOR has also been criticised by environmentalists, who say it encourages the burning of more fossil fuels. Whether keeping the CO2 out of the air counteracts any CO2 produced when burning the fossil fuel hasn’t been calculated.

Osbaldstone says there are no signs of any significant upturn in activity in terms of CCS or developing other low-carbon technologies.

"For the time being it’s just going to be a continuation of quite gradual change over time," he says.

Global warming mitigation is an issue that oil and gas companies may be able to take in their stride now but in many decades time, as renewables grow, efficiency measures increase and governments tighten legislation and increase taxes, it will be paramount.

Investing in CCS and other technologies shouldn’t just be seen as a legislation-led obligation upon industry to retain its place in the global energy market framework post-2060. Doing its part to halt climate change will also protect the industry from disruption from extreme weather events that are guaranteed to worsen the more the planet warms.

However, it is clear the industry won’t make significant progress alone; it needs strong leadership, investment and action from legislators, all of which has been lacking so far.

Electric mobility is a crucial element of the successful energy transition. Electric vehicles (EVs) are expected to account for over one-third of the new car sales worldwide by 2031, and so oil and gas companies are reacting with heavy investments across the EV value chain. Such investments are being made in a bid to remain relevant within this exciting segment.  GlobalData’s free report, Oil & Gas Sector Strategies in Electric Vehicles, reveals that transportation accounts for almost half of the petroleum products demand. However, the wider adoption of electric vehicles could slow the pace of petroleum products demand in the future.   Our report includes:   Use this report to help navigate a new frontier for the oil & gas industry.
By GlobalData

Shale Gas - A Potential Boon for the US Olefins Industry